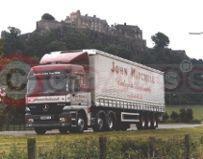 What better way to celebrate winning a prestigious industry award than by taking delivery of your first Mercedes tractor units?

The family-owned operator, which runs an MAN-dominated fleet of almost 100 trucks, the majority of them tractors, was recently named Haulier of the Year in the latest Motor Transport Awards for Excellence.

Judges praised the company for its bravery in giving up work that did not pay, but which accounted for 30 per cent of its business. In the three years since, it had replaced the lost turnover and increased profits significantly, thanks in no small part to its "great customer focus".

Managing Director Iain Mitchell, whose father founded the business in 1956, says: "We took an Actros demonstrator about 18 months ago and that worked quite well. But at 400bhp, the engine was not powerful enough for 44-tonne operation.

"We knew a 460bhp option was on the cards though, and when that arrived earlier this year we had no hesitation in returning to Western Commercial with an order. These are still early days for the Actros but driver acceptability is good and the first month’s fuel figures show the Mercedes returning between 8.7 and 8.8mpg, which already puts them on a par with our MANs.

"So the initial indications are certainly encouraging – we’ll now be looking for durability and reliability, coupled with excellent back-up, in the months to come."

The company, which also has depots in Dumfries, Manchester, Gloucester and Colchester, has a policy of contracting out all of its vehicle maintenance, and Western Commercial will service the Actros under a five-year r&m deal.

Mr Mitchell adds: "We’re still celebrating our success in winning Haulier of the Year and have just staged a family day for our drivers and staff. We won because we have good people who want to win, who want to be the best."

John Baker, Truck Sales & Marketing Director for Mercedes Benz in the UK, says: "The team at John Mitchell Haulage and Storage are highly professional and forward-looking, as has just been underlined by their success at the Motor Transport Awards. I am very optimistic that Mercedes Benz and Western Commercial can be a part of their success in the future."