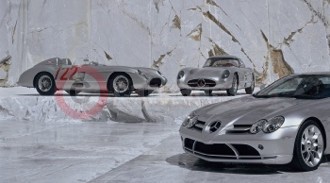 The legendary SLR: Mercedes Benz brings the acclaimed sports car back to life

Juan Manuel Fangio, Stirling Moss, Karl Kling – three of the men who wrote motor-racing history. In the mid-1950s they all helped make the Mercedes Benz 300 SLR one of the most successful racing sports cars of all time.

With its eight-cylinder, 2982-cc engine developing up to 310 horsepower, this Silver Arrow was capable of a maximum speed in excess of 300 km/h – enough to power it to glory in all the top road races of 1955. The Mille Miglia, Targa Florio, Tourist Trophy, Eifelrennen and the Swedish Grand Prix – the 300 SLR won them all.

Rudolf Uhlenhaut (1906-1989), head of both passenger-car testing and racing-car development at Mercedes Benz at the time, proceeded to build a road-going coupé version of this all-conquering racing machine. The 300 SLR Coupé – better known to car enthusiasts as the “Uhlenhaut Coupé” – incorporated the design and technology of the 300 SL Gullwing produced from 1954 into the 300 SLR competition car. It first appeared on the roads in 1955, turning heads wherever it went.

The spirited lines of the body, with its elongated bonnet, were complemented by the striking proportions of the side-mounted exhaust pipes, the air vents and the wire-spoke wheels. The cockpit, with its curved wraparound windscreen, was elegantly sculptured. Rudolf Uhlenhaut referred to his latest automotive work of art as a “hot-heeled touring car”, and the 300 SLR Coupé lived up to its billing. Weighing only 1117 kilograms yet developing 310 horsepower, the “Uhlenhaut Coupé” accelerated to a maximum speed approaching 290 km/h in testing (the manufacturer’s data showed a top speed of 284 km/h). This made the two-seater the fastest car of its time to be registered for use on public roads, as well as “one of the most exciting cars that Mercedes Benz has ever built,” as motorsport guru Karl Ludvigsen later observed.

However, the lightning-fast SLR Coupé never made it into series production. The Stuttgart-based car maker felt that the mid-1950s was not the right time to bring out a powerful sports tourer of this kind, leaving the road version of the SLR to fall into oblivion. As Mercedes pulled out of motorsport in 1955, the SLR Coupé project was put on ice. Only two prototypes of this masterpiece of power and elegance were ever built and yet this wonderful car had still become a legend in its own right.

This is a 18-year+ news article, from our Mercedes Benz archive, which dates back to the year 2000.

If in doubt check with your local Mercedes Benz dealer as car prices and technical data will have changed since 2003.