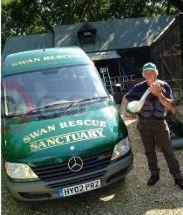 Stricken swans and other wildfowl are now being rescued from a host of different hazards by a dedicated team using a new, specially-converted Mercedes Sprinter ambulance.

The vehicle, a 211CDI model, is equipped with a comprehensive list of rescue and first aid equipment, shower and washing facilities for cleaning birds and tending their wounds, swan holding boxes, and electric vents to keep it cool during summer. It also hauls a trailer that carries an inflatable rescue boat. The Sprinter is the new flagship of the Swan Rescue Sanctuary, based in Wimborne, Dorset, the largest organisation of its kind in Britain. Former oil industry worker Ken Merriman and his wife Judy realised a long-held ambition when they opened their sanctuary in 1994. The 18-acre site, which has 40 ponds and lakes, is currently home to some 350 birds, a number of which are being cared for intensively. "We get all kinds of injuries," explains Ken, "from birds that have flown into power lines or become caught up in fishing tackle, to ones that have been attacked by dogs or even shot by callous idiots with crossbows!" Ken and Judy, who rely on the support of nine volunteer helpers, are on call to the police and other agencies 24 hours a day, and provide a rescue service throughout Dorset, west Hampshire, south Wiltshire and Somerset. "It's a large area so we need a vehicle that is both reliable and economical to run," continues Ken. "The Sprinter fits the bill perfectly on both counts, as well as being very comfortable to drive and tough enough to cope with the rough terrain that we often have to venture onto". Funded by the charitable Primrose Trust and supplied by Fareham dealer Pentagon, the new Mercedes has lined up alongside the Sanctuary's other, Mazda-based ambulance. But this vehicle's days are now numbered because the Sprinter has been such a hit that Ken and Judy, with more financial backing from the Trust, have since ordered a second, identical Sprinter to replace it. "We don't carry out surgery but we do administer a lot of first aid aboard the Sprinter," says Ken. "It's a lot less stressful for the bird if you can tend to it on the spot, so on-board facilities such as the hot and cold running water that we use to clean blood or mud from a wound are invaluable." He adds: "I've taken a few whacks down the years and suffered a couple of broken ribs but this is really a labour of love. I've always had a thing about swans and have wanted to work with them ever since I was a boy, so founding this sanctuary fulfilled a dream." " Our new Mercedes makes us even more efficient and that, hopefully, means we are able to save the lives of even more of these magnificent birds." Peter Lambert, Van Sales & Marketing Director for Mercedes Benz in the UK, says: "The Swan Rescue Sanctuary clearly does a great deal of good work and it is gratifying to learn that a Mercedes Sprinter has established itself as a key member of Ken and Judy Merriman's team, so much so that they've now ordered a second."
Published : 17/09/02 Author : Melanie Carter