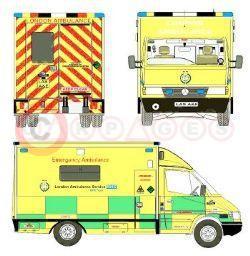 Ambulance chiefs in London are to switch half of their entire 395-strong accident and emergency fleet to Mercedes Benz.

In what is believed to be the UK’s biggest ever front-line ambulance deal, London Ambulance Service NHS Trust is buying 195 Sprinter-based units together worth some £6 million!

The announcement follows a comprehensive evaluation exercise that involved ambulance crews and other NHS staff, and took two years to complete.

Four demonstration vehicles were used for the trial and proved extremely popular with crews, who ranked the Sprinter highly across a range of criteria including comfort, manoeuvrability, braking performance and safety.

Ultimately, though, two key factors tipped the balance in favour of Mercedes Benz:

And the second was the fact that Mercedes Benz was the only manufacturer able to offer a factory-fitted, fully automatic five-speed transmission (a special order).

The London Ambulance Service NHS Trust had suspended its ongoing front-line vehicle replacement programme pending the outcome of the evaluation exercise. It has now placed a ‘catch-up’ order for 130 Sprinters, and will take another 65 at the start of the next financial year. In the longer term, it is planned that every one of the capital’s 999 ambulances will wear the three-pointed star.

The Trust is anticipating a six-year life for its Mercedes chassis, during which time each will cover some 140,000 miles. The demountable box bodies, meanwhile, should be good for at least two vehicle lives.

"Overall mileages are not particularly high," explains Fleet Manager Colin Jolly, "but it’s tough work, involving ‘blue light’ dashes through some of the most congested streets in the world."

He continues: "We were very anxious to involve staff fully at every stage in the vehicle evaluation exercise; after all, they are the people who have to work in these ambulances, day in, day out.

"The feedback we received on the Sprinter was very positive indeed, while Mercedes Benz have played their part too by listening carefully to our requirements and responding in the right way. I have no doubt that the Sprinter will prove to be ideally suited to the job."

Peter Lambert, Director of Van Sales & Marketing for Mercedes Benz, declares: "We were already the dominant force in the UK front-line ambulance sector, with a 60 per cent market share. To have now won such a large and prestigious new order, especially when the crews themselves had such a crucial input into the purchasing decision, only serves to underline the fact that with its combination of power, reliability and payload, the Mercedes Sprinter continues to lead the ‘charge of the blue light brigade’."

This is a 20-year+ news article, from our Mercedes Benz archive, which dates back to the year 2000.