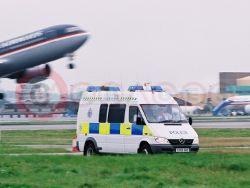 Armed officers responsible for policing one of the world’s busiest airports have a new weapon in their armoury – the Mercedes Benz Sprinter.

Sussex Police’s Gatwick Division has taken delivery of six Sprinter 413CDIs, which are now being used to carry out specific duties at the airport.

Gatwick handles more than 31 million passengers a year and covers an area of 1,687 acres. With the ever-present threats of counter-terrorism, airport emergencies and drug trafficking, policing the airport is a demanding and specialised job.

Four of the new vehicles have been fitted out as armed response units, for operation by firearms officers on patrol. Each Sprinter seats six highly trained officers, including the driver, and has compartments for firearms, ammunition, ballistic armour and other equipment needed in the field.

The remaining vans have also been converted, one for use by the airport’s search dog team, the other to a mobile cell for detaining and transporting suspects.

The vehicles, which have replaced a fleet of ageing Ford Transits and underwent modifications by Walsall-based coachbuilder MacNeillie and Son, came complete with Mercedes Benz’s innovative Sprintshift transmission, which can be used in either clutchless manual or full automatic modes.

Auxiliary batteries have also been fitted to power the banks of flashing lights and additional electronic equipment, including a Mobile Data Terminal (MDT) that allows officers to access the Police National Computer and Operational Information System.

PC Malcolm Fever, of Gatwick Division’s Operational Support Unit, says: "We chose the Sprinter for a number of reasons, most notably the superior payload, as our officers have to carry a lot of heavy equipment.

"Driving within the airport perimeter also means sticking rigidly to a 20mph speed limit and a lot of stopping and starting, so we were keen to have vans with automatic gearboxes. The Sprintshift system fitted the bill perfectly."

Peter Lambert, Sales & Marketing Director for Mercedes Benz Vans in the UK, says: "Traditionally, the main attraction of Mercedes vans to operators in the ‘blue light’ sector has been the high-performance capability of our biggest engines.

"Increasingly though – and Gatwick Airport Police are a prime example of this – the emergency services are discovering that our vans also have many other strengths, which make them ideally suited for a wide range of different applications."