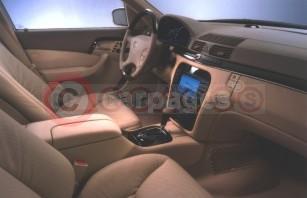 In terms of technology and style, the world's number one luxury-class saloon continues to forge ahead: Mercedes Benz is to unveil an S-Class featuring a host of modified details which further enhance the car's appeal and add to its innovations. The Stuttgart manufacturer's top-of-the-range model will make its public debut in the autumn of 2002.

A range of outstanding technical features enables the S-Class to further underline its status as a role model and trend-setter for passenger car development as a whole. Pride of place among the leading-edge, high-tech innovations goes to Pre-Safe, the preventive occupant protection system from Mercedes Benz, which heralds a new era in automotive safety. Pre-Safe can detect the threat of a collision in advance and initiate preventive measures to prepare the occupants and vehicle for impact.

Further new developments for the S-Class include a 12-cylinder, twin-turbo engine developing 500 hp and a drive-dynamic multicontour seat that can adapt to different road situations with lightning speed. Autumn 2002 will signal the arrival of the successor to the current S 320: the new S 350 with V6 engine developing 245 hp. The six-cylinder S 320 CDI diesel power plant now boasts an output of 204 hp (previously 197 hp) and provides 500 Nm of torque, equivalent to an increase of around six per cent.

Over 325,000 motorists world-wide have sampled the delights of the S-Class first-hand since production launch at the end of 1998, the car having established itself at the very top of its market segment in all the major regions around the globe.

The top-of-the-range Mercedes model accounts for some 46 per cent of new-car registrations in the luxury-class segment in Western Europe, whilst the figure is around 40 per cent in the USA and 58 per cent in Japan. In the UK, over 10,500 S-Class Saloons have been registered since its 1999 launch, and the car is the number one luxury saloon currently on sale.

In addition, the catalogue of S-Class successes lists some four dozen international awards and prizes. Honours regularly bestowed upon the S-Class include "Best Car", "Most Innovative Saloon" and "Outstanding Design Quality".

Newly designed front section for an even more powerful demeanour

Features of the model year 2003 S-Class include discreet design modifications that further emphasise the saloon's agile and elegant character. By way of example, the front bumper is enhanced by a new-look lower air intake which gives the impression of a wider and, therefore, even more powerful body. Modifications have also been made to the radiator grille which, courtesy of the designers, now displays added height and a more pronounced slant.

From a stylistic viewpoint, the most important model enhancement features are the powerfully sweeping headlamps, their sophisticated clear glass look and high-sheen reflector areas bringing an extra touch of brilliance to the saloon's appearance. The exterior mirror casings and tail lights also feature a new, even more elegant design.

Inside the S-Class, over 40 features have been either redesigned or - using new materials - further enhanced by the Mercedes designers, to provide the occupants with even more comfortable and luxurious surroundings. The discreet chrome strips which adorn the fine wood trim, further improved seat upholstery and new-look, elegant control switches are just three examples of the superb attention to detail that has gone into the model refinement package.

Mercedes customers can opt for an exclusive interior appointments package called designo couture, including high-grade nappa and nubuk leather varieties, trim parts carved from the finest poplar or maple wood as well as an interior roof lining decked out in sumptuous Alcantara.

Pre-Safe ushers in a new era of passenger car safety

Mercedes Benz has further perfected the exemplary safety technology at the heart of the S-Class by introducing Pre-Safe, the new occupant protection system with foresight. The Stuttgart manufacturer has notched up another first by unveiling this innovative system that can recognise the threat of an accident in advance and initiate preventive protection measures to deal with the situation in hand. As a new era in passenger car safety dawns, the S-Class therefore continues to set the standards.

Preventive occupant protection features on board the top-of-the-range Mercedes model include seat belts that can be tensioned within a split second so as to ensure that the driver and the front passenger are in the best possible sitting position before a crash occurs, enabling optimum deployment of the airbags upon impact. At the same time, Pre-Safe moves the front passenger seat and the electrically adjustable individual seats for the rear passengers into their optimum positions and closes the sunroof automatically when the vehicle begins to skid.

This new safety concept is based on the findings of Mercedes accident research, which indicate that, in about two thirds of all road accidents, there is a relatively long period of time between the moment an imminent collision is detected and the moment the collision actually occurs. In future Mercedes Benz will use this research to implement preventive protection measures which can further reduce the risk of injury to vehicle occupants. The model year 2003 S-Class marks the first venture into the realms of this leading-edge, future-compatible safety concept.

In order to detect a collision in advance, Pre-Safe uses sensors in the ESP Electronic Stability Program and the Brake Assist system, which warn against critical situations. The system components are reversible: for instance, if the collision is avoided at the last moment, the preventive belt tensioners are released automatically so that the occupants can reset the seats and sunroof to their original positions. Pre-Safe is then ready to spring into action again immediately if called upon.

Pride of place in the Mercedes engine range will go to a newly developed 12-cylinder model complete with twin turbochargers, water intercooler and numerous other high-tech innovations. The V12 power plant - produced using state-of-the-art, lightweight materials - succeeds in squeezing 500 hp from its 5.5 litre capacity, making it one of the most powerful engines in itS-Class. With a peak torque of 800 Nm that arrives at just 1800 rpm, the new Mercedes 12-cylinder propels the flagship S 600 Saloon from 0 to 62.5 mph in a mere
4.8 seconds.

The Mercedes engineers have also modified the tried-and-tested six-cylinder engines for the S-Class, further boosting both output and torque:

From autumn 2002, the high-performance S 55 AMG Saloon will receive the powerful, supercharged eight cylinder engine - as seen in the SL 55 AMG. This power plant provides around 39 per cent more power and 32 per cent more torque than the preceding model. To put this into figures: 500 hp and 700 Nm from 2750 rpm.

The COMAND (Cockpit Management and Navigation Display) system is now standard in all S-Class models. Compared to its predecessor, the current system has a larger and, therefore, even clearer colour display (6.5") in 16:9 format.

Mercedes Benz has totally remodified the S-Class seats - introducing a softer design and new upholstery technology - to give the driver and front passenger even greater seat comfort than previously. The new drive-dynamic multicontour seat - now available as an option for the S-Class - is the ultimate in sophisticated seat technology.

It has a series of integrated air chambers which are inflated or deflated according to the situation in hand so as to ensure that both driver and front passenger benefit from superlative lateral support when the car is cornering. The seat also has an in-built computer which assumes electropneumatic control, taking just a split second to process data such as steering angle, lateral acceleration and road speed, in order to vary the inflation pressure and volume of air in the chambers precisely in accordance with the situation in hand.

When the vehicle enters a left-hand bend, for example, the system pumps more air into the chambers on the right-hand side of the backrest, thus ensuring greater lateral support for the seat occupant.

The revised S-Class Saloon is available in UK showrooms from 1 October. Prices and specifications will be announced nearer the launch date.