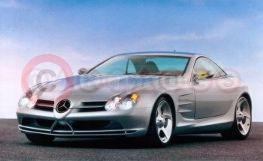 Mercedes Benz has opened the order books for two of the world's most desirable cars, the ultimate luxury Maybach and SLR supercar.

Although the cars will not go on sale in the UK for another two years, there has been such phenomenal world-wide interest that would-be owners are being asked to place deposits now.

The Maybach was first unveiled as a concept car at the Tokyo Motor Show in 1997 as the pinnacle of motoring luxury. The production version will combine the traditions of a large luxury saloon with a host of advanced technical features.

It is likely to cost in excess of - 200,000 and will be built to the highest standard with exceptional levels of equipment. Customers will be able to design interior elements of their own cars with the assistance of a dedicated team of engineers and designers. So each of the luxury vehicles can be exclusive and unique to match exactly the individual customer's demands.

Final details of the Maybach's specification are still to be confirmed, but it is likely that many of the features on the concept car will be included in the production model. These include two electrically adjustable aircraft-style reclining seats in the rear, an on-board bar for hot and cold drinks, an electrochromatic glass sunroof, a sophisticated communications and on-board entertainment system, three telephones, a portable computer and video recorder.

The standard wheelbase Maybach will be longer than a Mercedes S600 and will be powered by a twin-turbo V12 engine. It will ride on an air suspension system specially developed to offer maximum comfort for this super-luxury car. The engine, with a capacity of just under six litres, will be built from magnesium and aluminium and will be extremely light, yet able to deliver high-torque levels for a superb, smooth and swift drive.

A longer wheelbase model, providing even more interior space and the scope for further special customer features, will be available.

Production of the Maybach will start in 2002 in a new unit, similar to a custom shop, at the Mercedes Benz Sindelfingen plant near Stuttgart. Right-hand-drive cars will be built from 2003.

The Maybach name is homage to Wilhelm Maybach (1846-1929) who was recognised as a genius of car design. He was a close friend of Gottlieb Daimler and helped to develop the first Daimler cars. Maybach's son, Karl, went on to build large, luxury cars bearing the Maybach name, such as the legendary Maybach 12.

Staggering looks and performance will mark the Mercedes Benz SLR McLaren out as a true supercar.

With a Mercedes-AMG tuned V8 5.5 litre supercharged engine, the SLR will have an estimated 0 to 62mph time of just 4.2 seconds and a top speed of around 198mph.

It will also be the first Mercedes to be built in Britain. It is being developed and will be constructed at the McLaren Cars Ltd factory in Woking, Surrey. DaimlerChrysler is the largest shareholder with a 40 per cent holding in the TAG McLaren Group.

A striking prototype SLR was the sensation of the 1999 Detroit Motor Show and has gone on to attract world-wide interest. It is expected that just 500 of the left-hand drive only cars will be produced each year. They are expected to cost in the region of £240,000 - £260,000. More than 50 a year are expected to be sold in Britain.

The Mercedes Benz SLR McLaren will include materials and ground-breaking technical innovations adopted from Formula 1. The bodywork will be made of an intelligent combination of carbon fibre and high-performance materials to give maximum rigidity and safety protection at a weight that will set the standards in thiS-Class of car. The car has a target weight of just 1,400 kilograms.

Advanced aerodynamics and fibre-reinforced ceramic brakes will give the car huge road-hugging and stopping qualities.

The concept SLR displayed a blend of F1 race design, the Mercedes "four eyes" headlamps and gullwing doors, which open automatically by means of gas-pressure springs; these owe their style to the legendary SL sports cars of the 1950s.

Dermot Kelly, Director of Mercedes Benz cars in the UK, said: "Both of these cars represent the ultimate in their respective classes. The genuine interest from would-be purchasers has been higher than anyone had imagined.

"Even though it will be two years before we see these cars in Britain, we are having to ask people to confirm their interest now with a £25,000 deposit to join a world-wide reservation list for both the Maybach and the SLR."

This is a 20-year+ news article, from our Mercedes Benz archive, which dates back to the year 2000.

If in doubt check with your local Mercedes Benz dealer as car prices and technical data will have changed since 2001.