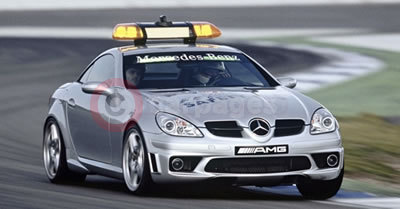 Thanks to modifications to its braking system, chassis, cooling and exhaust systems, as well as weight-reduction measures, the SLK 55 AMG Safety Car will be showing off its optimised driving dynamics. And the improvements will prove very useful: the all-new Roadster will have to lead the world’s fastest drivers around the Northamptonshire circuit at high speed in the event of an emergency, while ensuring maximum safety.

Professional racing driver Bernd Mayländer will be behind the wheel, taking on the challenge of keeping the Formula One cars out of harm’s way in the event of crashes and bad weather conditions. Mayländer will have to position himself at the head of the field and drive at high speed, leading the Formula One cars. If the speed becomes too low, the high-tech F1 engines could experience problems. For example, they could overheat due to an inadequate supply of cooling air, while the tyres could cool too much and lose grip. Fast laps at speeds of up to 150mph at the world’s Grand Prix tracks are an everyday occurrence for the Safety Car, which masters these situations without breaking sweat.

Roof lights send out clear signals to the Formula One drivers

SLK 55 AMG: the FIA Formula One logos and the light system on the roof. The green lights are turned on by Mayländer’s co-driver, Peter Tibbets from the FIA, when the Safety Car first pulls out and has to overtake all of the F1 cars. Once the Safety Car has taken the lead, the orange lights signal to the Formula One drivers that overtaking is strictly forbidden. The white strobe lights in the headlights and tail-lights remain active whenever the car is on circuit.

This is a 17-year+ news article, from our Mercedes Benz archive, which dates back to the year 2000.

If in doubt check with your local Mercedes Benz dealer as car prices and technical data will have changed since 2004.