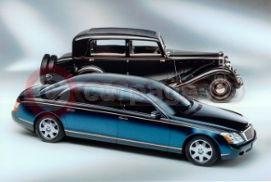 With the market debut of its breathtaking ultra-luxury saloon now just six months away, Maybach has unveiled the newly developed "Type 12" engine which will be used to power it. The innovative twelve-cylinder engine will go on show to the public for the first time at the Geneva Motor Show this week, before going into full-scale production in the autumn.

Power, refinement, long life were all qualities of the legendary Maybach engine of 1929 and are again present in the new "Type 12" engine – a new masterpiece in engine technology. The awesome statistics – 5.5 litres displacement, twin turbochargers, peak output of 550 hp and peak torque of 900 Newton metres – give typical Maybach power and assurance in all situations.

This impressive picture is completed by superb smoothness and outstanding vibrational behaviour. These qualities are inherent design features: the V-angle of 60 degrees balances inertia forces and moments at source, without the need for special balancer shafts.

This is the same cylinder angle that was chosen by Karl Maybach for his "Type 12" engine. The Type 12 went down in automotive history as the largest German car engine of its era and the first 12-cylinder car engine in the world to be produced on a relatively large scale.

Between 1929 and 1938, the Friedrichshafen-based company Maybach-Motorenbau GmbH built something like 300 of these legendary engines, which had a displacement of seven litres and delivered 150 hp at just 2800 rpm.

"You can feel the smoothness and responsiveness with which the tremendous power is unleashed, without harshness or vibration," was how the company brochure of 1929 described the impressive power output and smooth running characteristics of the new Maybach 12. Two years later the displacement was increased to eight litres and the power was increased to 200 hp, giving the Maybach "Zeppelin" a top speed of 106 mph.

Impressive power and torque are also a hallmark of the new "Type 12" engine of 2002. An advanced twin turbocharger system is responsible for supplying extra air to the V12 unit. With their instantaneous response, the twin turbochargers allow the driver to harness the tremendous power of the engine even at lower rpm: maximum torque of 900 Nm (664 lbs.ft) is delivered at just 2300 rpm, while the peak horsepower of 550 hp is developed at 5250 rpm.

The turbines of the twin turbochargers are accommodated in the exhaust manifold, a location which also maximises their efficiency. The compressed air flows from the turbochargers through two engine-mounted water-cooled intercoolers, so that its temperature and density are optimised by the time it enters the combustion chamber.

Just like the advanced six, eight and twelve-cylinder engines of Mercedes Benz, the "Type 12" engine for the new Maybach features innovations like twin-spark ignition and three-valve technology, with their many associated benefits:

"A reliable, powerful ignition spark even at very low rpm" was an important requirement back in 1929, too, at Maybach-Motorenbau GmbH. To meet this requirement, the V12 engine of the time was equipped with two separate distributors and automatic spark timing – an innovation in engine design.

The topic of lightweight design was an important one for the engineers of Maybach-Motorenbau, just as it is today. To give the first "Type 12" engine as favourable a power-to-weight ratio (hp/kg) as possible, Karl Maybach decided to use cast aluminium for the complete crankcase and cylinder heads.

The engineers who developed the new twelve-cylinder engine again opted for a die-cast aluminium crankcase. This time, in order to minimise noise and vibration, the bottom of the crank assembly consists of an aluminium bedplate incorporating grey cast iron bearing brackets. This gives added rigidity and is also highly effective in combating longitudinal vibration of the engine block.

The cylinder head covers are of die-cast magnesium, while the cylinder liners are made of a lightweight, low-friction aluminium-silicon alloy.

Legendary Automotive Brand Makes Its Comeback After A Sixty-Year Absence

Following its decision to revive the luxury automotive brand Maybach, the DaimlerChrysler Group will be presenting the new Maybach in autumn 2002. With its unique roominess, its superlative engineering and its exceptional exclusivity, this luxury vehicle follows in the tradition of the legendary Maybach cars of old.

Maybach’s sister brand Mercedes Benz has been the leading international innovator in the field of safety, comfort, reliability and long life for over one hundred years. The new Maybach Saloon will further advance this leading edge motoring technology, taking its customers’ experience of a motor car to new heights.

In the 1920s and 30s Maybach and Mercedes Benz cars were the last word in German automobile manufacturing. With their technical prowess, supreme quality and exclusive style, these imposing luxury cars quickly made a name for themselves all over the world. As from 1930, the flagship model was the Maybach "Zeppelin". With a length of 5.50 metres, this was the most prestigious German passenger car of the times.

The world’s first Mercedes, the Mercedes 35 PS of 1901, was in fact a brainchild of Wilhelm Maybach, the long-time friend and colleague of Gottlieb Daimler and Director of the Daimler-Motoren-Gesellschaft (DMG). This model provided the blueprint for all subsequent passenger cars. In 1909, Maybach went on to build high-performance, highly reliable engines for Zeppelin airships. Then, in 1919, his son Karl began developing exclusive luxury automobiles. He brought out his first model just two years later. By 1941, some 1,800 vehicles had left the stables of Maybach Motorenbau.

Mercedes Benz Maybach Images may not be UK specification cars. Colours and exterior and/or interior elements may differ from actual models.