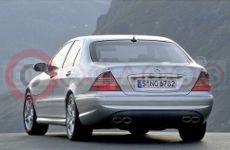 Hot on the heels of the recently announced S-Class Saloon and CL-Class Coupé ranges, British pricing and specification details have been released. Due on sale from 1 October, both cars have undergone subtle styling revisions with significant improvements under the skin.

The S-Class Saloon has been winning accolades and record numbers of customers since its launch in 1998. The new car yet again raises the bar for the competition. Two major specification improvements are standard across the whole range: Pre-Safe and COMAND.

Pre-Safe is a revolutionary system which can detect when an accident is about to occur. Using the car's ESP (electronic stability program) and BAS (brake assist) sensors, Pre-Safe pre-tensions the front seat belts, closes the electric sunroof, and repositions the passenger seats to better-protect the occupants in the event of an impact. If no accident occurs, the system resets itself - the first time a significant reusable safety system has been fitted to a road car.

COMAND is the familiar Cockpit Management and Navigation Display System. Combining a new wide screen GPS satellite navigation and a revised audio system (with the option of a television tuner), COMAND was previously only standard on the S 500 and above.

Other revisions to the S-Class include subtle styling changes, primarily to the lights, bumpers and grille, plus even higher quality materials inside. Under the bonnet, four new or revised engines complete the range of seven powerplants.

The hugely-popular S 320 CDI has been the only luxury diesel car in Britain since 2000. Again available in standard and long wheelbase guises, the engine has been decreased in capacity slightly (to 3222 cc from 3226 cc) but power, torque and fuel economy have been improved.

Now featuring 204 hp and an amazing 500 Nm of torque from 1800 to 2600 rpm, the new engine returns 36.7 mpg on the combined cycle. Carbon dioxide emissions have also been reduced from 212 to 204 g/km, dropping the car two company car tax bands. With performance to match its refinement (0-62.5 mph in 7.9 seconds and a 146 mph top speed), the revised S 320 CDI looks set to see off the impending competitors models, when they arrive in Britain next spring.

Topping the S-Class range are two engines the saloon shares with its luxurious CL-Class Coupé stablemate.

The first is a 5.5-litre bi-turbo V12, which will be fitted to the S 600 L and CL 600 models. Developing 500 hp and 800 Nm of torque, the engine provides a creamy scoop of delicious acceleration at any speed. Ideal for grand touring in the traditional sense, the 600 models will hide their considerable talents under a near-silent veil of refinement. Both the saloon and coupé are limited to 155 mph, whilst despatching the 0-62.5 mph charge in only 4.8 seconds.

For those who prefer their performance cars to growl rather than whisper, the new S 55 AMG models and CL 55 AMG will be the ideal choice. Powered by a 5.4 litre supercharged V8 unit, these engines produce 500 hp and 700 Nm. Acceleration from
0-62.5 mph and top speed match the V12 models, but as you'd expect from AMG, the velocity is accompanied by a spine-tingling howl.

As well as jaw-dropping performance from the engines, the flagship coupé retains its striking appearance. Enhanced with new clear-lens bi-xenon front lights and different bumpers, the CL-Class Coupé still sits at the top of the style tree.

Inside, material upgrades enhance the opulent feel that is fitted as standard in every car. Modified instrument controls and new interior colours are the most noticeable changes, along with the standard COMAND unit which, as in the S-Class Saloon, features a 6.5" widescreen colour display.

Since its unveiling earlier this year, the all-new E-Class Saloon has been setting new standards for executive saloons. Now, with the introduction of the E 55 AMG model, the high-performance end of the sector has a new benchmark. Powered by a 5439 cc, 476 hp supercharged V8 engine, AMG has added its own touches to the standard E-Class specification.

There's AMG bodystyling and interior appointments to give a hint of what lies beneath, but it's the tech spec that whets the appetite. Steering wheel mounted gear shift buttons work with the five-speed automatic AMG Speedshift gearbox. To cope with a 0-62.5 mph time of only 4.7 seconds, AMG has tuned the standard SBC™ brake-by-wire system, and upgraded the ESP and ASR electronic stability program in the process. Riding on developed AirMATIC DC suspension, the flagship model looks the part, and performs equally impressively.

From 1 October 2002 the on the road price of SLK-Class Roadsters will increase by £290 while the SLK 32 AMG model will rise by £170. The increases are inflationary, and are caused by the Euro strengthening against the Pound. A "Euroland" price rise earlier this year was avoided in the UK as the exchange rate was more favourable, and the increase was absorbed.