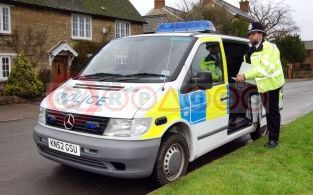 Police forces across the UK are turning increasingly to the three-pointed star in their drive to cut crime and increase public confidence.

Among the first to convert Mercedes vans for use as ‘mobile police offices’ are Northamptonshire and Lincolnshire. Their vehicles are proving the perfect solution for raising the police’s profile in outlying, rural communities.

The vans tour villages regularly and act as contact points to which local people can come for advice, or to raise any matters of concern.

The 2.7-tonne Vito’s size and appearance were key factors in persuading Northamptonshire Police to choose Mercedes Benz. Imaginative modifications include driver and passenger seats that can swivel round to transform the Vito from a police car into a welcoming meeting room, complete with chairs and tables.

Beat officers were so impressed with their first mobile police office, which was part-funded by The Countryside Agency, that local dealer Arlington of Northampton will shortly be supplying the Force with two more Vito 108CDIs.

Ray Adkins, Northamptonshire Police’s Transport Manager, says: "We considered a number of options and found the Vito to be the most appropriate, both externally and internally. It does not look aggressive in any way and we felt this would make it more welcoming for people to come and talk to officers inside.

"The Vito also serves as a fully operational emergency response unit and is equipped with laptop computers, which officers can use to file reports, thus cutting down on time travelling to and from the police station."

Meanwhile, Lincolnshire Police turned to local dealer H&L Garages for their first purpose-built mobile police office, which comes from the opposite end of the Mercedes van spectrum. Based on a 7.5-tonne Vario 814D, it is now helping officers to maintain a high-profile presence in villages surrounding Grantham, Sleaford, Stamford and Spalding.

With desks, computers and a full complement of on-board communications systems, the vehicle carries leaflets and other crime-prevention literature as well as refreshment facilities. It also doubles as a mobile command centre for use during major incidents, a role in which it performed admirably during recent riots at Lincoln Prison.

Chief Inspector Peter Pont, Head of Operations for Lincolnshire Police South Division, says: "We chose the Mercedes because it is a big vehicle and therefore highly visible. It was purchased under a Home Office contract agreement already in existence and combines a high build quality and competitive operating costs, with a three-year warranty and a good, anticipated residual value."

Peter Lambert, Mercedes Benz Van Sales and Marketing Director, declares: "These two examples underline the great flexibility of the Mercedes van range. Here we have both our largest and smallest vans being employed as mobile police offices, while also fulfilling other, important roles.

"Yet again we see that whatever the call – be it large or small – Mercedes Benz has the right van to meet the needs of the emergency services."

This is a 18-year+ news article, from our Mercedes Benz archive, which dates back to the year 2000.

If in doubt check with your local Mercedes Benz dealer as car prices and technical data will have changed since 2003.