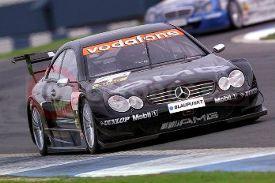 With over 200 Grands Prix to his name, including a memorable birthday victory at Canada in 1995, Alesi was bound to deliver a thrilling season. He didn’t disappoint. Alesi finished fifth in the drivers’ championship, and his season high point was a victory at Donington. His car was number 2, the new CLK-DTM.

Technical regulations are tight in DTM, and the cars are built to an exacting set of rules. All cars are rear-wheel drive, and are powered by four-litre V8 engines. There are no driver aids (ABS or traction control) allowed, and Dunlop provides the same compound tyres to every team. Only two engines are allowed per car per season, making durability as important as outright speed.

Because of twin air intake restrictors, the engine is, ironically, slightly less powerful than the supercharged V8 road cars - developing around 470 hp at 7500 rpm. However, the cars’ all-in weight of 1080 kg (including Mr Alesi) means its performance is breathtaking. It’s 635 kg lighter than the CLK 55 AMG. Add in 18 inch slick racing tyres (10 inches wide at the front; 12 inches at the rear) and carbon brakes, and it’s clear that cornering and stopping is just as exciting to watch as accelerating.

The lightweight theme continues in the drive train, with a carbon fibre drive shaft, three-disc carbon clutch (mated to a standardised six-speed sequential transmission), and a standardised differential and diff lock. Double wishbone spring and damper pushrod suspension is fitted all round, and steering is by a power-assisted rack and pinion unit.

The CLK-DTM differs from its roadgoing cousin in its body construction too. Rather than a svelte monocoque, the racing car has a tough tubular grid frame with steel panels. As with the road cars, crash protection is a priority - with an integrated driver’s safety cell in addition to front, rear and lateral crash structures.

Overall, the length of the CLK-DTM is 4690 mm (52 mm longer than the road car), it’s 1845 mm wide (105 mm wider), 1255 mm high (159 mm lower), and has a wheelbase of 2695 mm (20 mm shorter). Aerodynamically the CLK-DTM punches a far larger hole in the air than the slippery road car. This is thanks to its low front apron, side skirts, flat underside and a standardised twin-wing rear aerofoil is fitted at the rear.

The CLK-DTM had a successful first season, with the Mercedes-AMG/Vodafone team winning the team championship, and Warsteiner AMG-Mercedes scooping third. In addition to Alesi’s fifth place in the championship, Bernd Schneider finished second, just six points behind the champion.