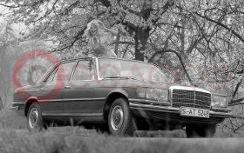 What do you remember about 1972? It was, after all, a classic year packed full of significant, and not so important events.

Did you see the first broadcasts of TV shows like the puppet-laden Rainbow or boffin-rich Mastermind? Do you remember watching Al Pacino’s menacing performance in The Godfather? Perhaps you dressed up like maverick cop Columbo, cranked up your solid state hi-fi and listened to Lieutenant Pigeon’s smash hit Mouldy old Dough.

Whilst pulses were being raised with the first publication of The Joy of Sex, Mercedes Benz introduced to the world the joy of "S" in the shape of the brand new S-Class Saloon.

While many things from the era of loon pants and monstrous sideburns have slipped into the realms of nostalgia, the S-Class Saloon is still going strong, and the range has just been revised to coincide with its 30th anniversary.

Back on 25 September 1972 when the car was unveiled in Spain’s Costa Brava, the new S-Class caused a huge stir. Laden with innovative features (now an S-Class hallmark), the luxurious Mercedes Benz featured the complex-sounding double-wishbone front suspension with brake dive support and zero steering offset. The fuel tank was positioned above the rear axle rather than in the rear impact zone – a safety revolution.

Inside, the new S-Class featured a padded dashboard, deformable or concealed switches and a four-spoke security steering wheel, all of which were designed to protect occupants in the event of a crash. Safety cells were still new in the 1970s, and the ’72 S-Class even featured rain channels to improve wet weather visibility, and its rear lights were ribbed to ward off dirt, and increase pleasure.

These days Lieutenant Pigeon is back out on the road again, Columbo’s repeated on digital TV channels, and Zippy and George have left the Rainbow House to become nightclub favourites. The S-Class has fared somewhat better than these other legends, having spent the past three decades innovating and leading the automotive industry, and the new models are no different.

Safety is still paramount, and the new S-Class features world-first Pre-Safe technology. Using advanced electronics and sensors, Pre-Safe anticipates when an impact is likely, and pre-tensions the front seat belts, moves seats and closes the sunroof to help protect the occupants. If there isn’t a crash, the systems reset themselves – unheard of until now.

Under the bonnet, the new S-Class is as advanced today as its forerunner was way back when. In 1972 the biggest engine was a 200 hp 3.5 litre V8 unit in the 350 SEL. These days, the V8 is supercharged and has 5.4 litres with 500 hp, and there’s also a 500 hp bi-turbo V12 unit for more refined tastes. Even diesel is a clean word now – the new S 320 CDI will reinforce the car’s position as the UK’s number one (and currently only) luxury diesel car for the next few years.

Thirty years have seen huge advances in motor cars, but Mercedes Benz is confident that its new cars will last for another three decades. That’s why every new S-Class has 30-year mobilo-life warranty as standard. Guaranteeing against corrosion or breakdowns, the new S-Class Saloon can keep on going until Pop Idol, Men in Black 2 and Liberty X have become the cult classics of yesteryear.