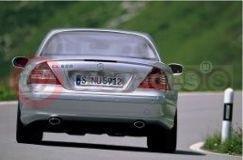 Its lines express elegance and dynamism while its high-tech innovations make driving safer and even more enjoyable -- for the 2003 model year the successful Mercedes Benz CL-Class Coupé once again sets new standards in the areas of design and technology. Featuring a subtly updated body, an even more exclusive interior and state-of-the-art technology, the latest version of this top coupé will be appearing in UK Mercedes Benz retailers from 1 October.

The most striking features that characterise this superb coupé are the updated twin headlamp face with its clear-lens design, and the restyled front bumper that gives the car an even more powerful presence.

The housings of the exterior mirrors have also been modified and now include exit lighting that switches on automatically to illuminate the area next to the vehicle when the doors are opened or when the remote-control central locking system is activated. This feature enhances passenger safety and comfort when getting in and out of the car.

The elegant character of the coupé is further reinforced by the tail-lamps whose brilliance is enhanced by the redesigned glass covers. 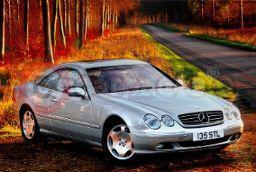 A newly-developed 12-cylinder bi-turbo engine puts the CL-Class Coupé in the same power category as thoroughbred sports cars. The V12 powerplant in the CL 600 generates 500 hp and develops a maximum torque of 800 Nm from 1800 rpm with a boost pressure of 1 bar.

This means that this state-of-the-art 5.5 litre unit exceeds the power output of the previous Mercedes twelve-cylinder engine by some 36 per cent while its torque figure is a remarkable 51 per cent higher. With all this power under the bonnet, the CL 600 accelerates from standstill to 62.5 mph in just 4.8 seconds (predecessor: 6.1 seconds). The maximum speed is electronically limited to 155 mph.

In addition to its bi-turbo system, the new V12 boasts an impressive array of technological innovations including a special low-temperature circuit with two water-cooled charge-air coolers, three valves per cylinder as well as AC dual ignition with continuous ionic current diagnosis for optimum ignition functionality.

Thanks to its state-of-the-art engine technology and the effective emission control system featuring two catalytic converters mounted on the firewall, the new Mercedes 12-cylinder engine already meets the strict EU 4 emission standard which comes into force in 2005. The fuel consumption of the CL 600 is 19.2 mpg (NEDC combined).

From autumn 2002, the CL 55 AMG high-performance Coupé will be powered by the mighty 5.5 litre supercharged V8 unit developed by Mercedes-AMG. This engine also has an output of 500 hp and accelerates the coupé from 0 to 62.5 mph in just 4.8 seconds thanks to its 700 Nm of torque (from 2750 rpm). A five-speed automatic transmission with racing-style steering-wheel shift controls completes the total sporting experience aboard the new CL 55 AMG.

All engine variants of the CL-Class Coupé are equipped as standard with a landmark in advanced automotive technology: Active Body Control (ABC). Developed by Mercedes Benz, this unique system adjusts the suspension and damping settings to the current driving situation second by second and so reduces body movement - when accelerating, cornering or braking - to a minimum.

Furthermore, the engineers at Mercedes Benz’s Sindelfingen headquarters have developed an additional system for the 2003 model-year CL-Class Coupé which constantly monitors the total weight of the vehicle. This information is taken into account in the calculations performed by the Active Body Control system. As a result, the handling is even more dynamic and is largely unaffected by the vehicle’s load.

With safety features including a two-stage passenger airbag, windowbags and sidebags, seat belt tensioners and belt force limiters as well as automatic child-seat recognition, the CL-Class Coupé already represented the benchmark in the field of occupant protection in its category when it entered series production in autumn 1999.

From the 2003 model year, Mercedes Benz is extending the coupé's innovative safety equipment with the addition of two front-mounted satellite sensors which permit early detection of the severity of an accident and, as a result, the appropriate degree of inflation of the two-stage passenger airbag. Furthermore, the satellite sensors also allow the seat belt tensioners to be triggered at an even earlier stage, thereby ensuring optimum occupant restraint in an impact.

Another new safety feature is the automatic weight classification of the passenger by means of a special measuring foil in the seat cushion. This ensures that the two-stage passenger airbag is triggered in accordance not only with the severity of the accident, but also with the weight of the passenger, too.

From autumn 2002 the exclusive interior of the CL-Class Coupé will benefit from enhancements to various details within the context of a sensitive update programme undertaken by Mercedes designers. The changes are clear as soon as one gets into the coupé. The centre console has attractively redesigned switches, while the size of the colour display (16:9 widescreen format) for the standard COMAND unit with its integral radio, navigation system and CD player has been increased to 6.5 inches.

UK prices and specifications will be announced closer to the launch date.