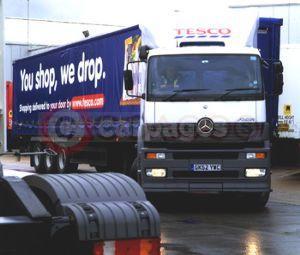 Britain’s biggest supermarket chain has placed the Mercedes Axor at the top of its shopping list.

The company invited a range of manufacturers to submit vehicles for evaluation, and Mercedes Benz entered a 4x2 Axor 1840LS unit, powered by a 12-litre, straight-six, 400bhp engine.

"The first stage of the evaluation was a preliminary fuel trial, which we carried out from our depots in Scotland and London," says Tesco Head of Engineering Nigel Baranowski.

"We nominated certain drivers and routes, and kept repeating those routes, with the same individual driving each vehicle for a week. For the first day of each week an expert from each manufacturer went out with the drivers, to give them tips on how to get the best performance from their truck, and at the end of each week they swapped around until everyone had driven every vehicle on every route."

Data from the trial runs was collected, along with the drivers’ comments, before the trucks were sent into other Tesco distribution centres for further driver feedback.

The best three vehicles were then sent on a week-long tour of the country, driving virtually in convoy along a series of routes chosen for their variety of road and traffic conditions, producing yet more fuel economy data for analysis.

"The upshot of all this was that throughout the entire process the Mercedes Axor came out as the best performer in terms of fuel economy every time," says Mr Baranowski.

The fuel figures were built into a costing model, which also looks at maintenance costs and lease or purchase charges, as well as driver feedback. Once the numbers had been crunched the Axor emerged as the preferred choice.

"We are buying some MAN units as well," he says, "but the overwhelming majority of this order has gone to Mercedes Benz."

The Axor are now trunking between Tesco regional distribution centres and making deliveries to high street and out-of-town stores. Most are 4x2 1840s plated at 38 or 40 tonnes, although 15 are 6x2 Axor 2540LS models, bought for 44-tonne work with high-cube, double-deck trailers.

Mr Baranowski also revealed that the Axor’s back-to-basics design was a major point in its favour. "We saw the fact that it’s not bristling with high technology as a positive benefit," he says. "Previously we had been put off from trying the Actros on our fleet because we felt it was overly complex for the work that we do."

John Baker, Director of Truck Sales and Marketing at DaimlerChrysler UK, adds: "Tesco is exactly the kind of operator that we had in mind when we decided to build the Axor, so naturally we are delighted with this order. It proves what we already knew – that UK operators have been crying out for a good, honest, uncomplicated truck from Mercedes Benz, which is precisely what we have now given them."