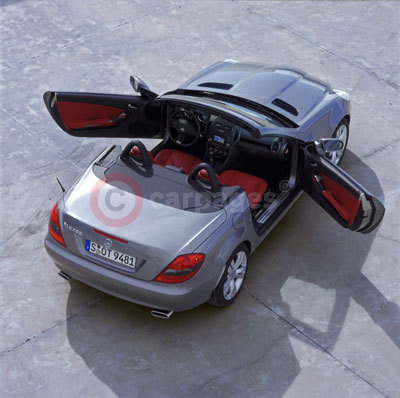 The Mercedes Benz SLK-Class Roadsters have long captured the hearts of sports car enthusiasts. Incorporating around 650 newly developed parts, the SLK models of 2008 are even more dynamic and now offer an even more emotionally charged driving experience. Key visual enhancements include new-look front and rear sections as well as a meticulously modified interior with a new instrument cluster and three-spoke sports steering wheel. A fast-running V6 sports engine developing 224 kW/305 hp and an optionally available direct-steer system truly bring the bold, dynamic character of the two-seater SLK 350 to the fore. Furthermore, all of the engines in the line-up are now far more economical on fuel and, therefore, emit even less CO2, despite a substantial increase in output in many cases. The new-generation SLK models will be available from April 2008, pricing will be announced early in 2008.

Since their first appearance in 1997, the compact SLK Roadsters have come to symbolise Mercedes Benz' dynamic brand image. Already a familiar sight on our roads, the second-generation two-seater is to be further enhanced with the implementation of a raft of measures in 2008, to further emphasise the car's sporty character and continue the SLK-Class success story by introducing new, dynamic, powerful elements. Sales of the SLK-Class Roadster are now approaching the half-million mark with over 495,000 sold, over 40,000 of which were sold in the UK.

The new-generation SLK displays new sporty highlights, further enhancing the appeal of the successful two-seater with the trendsetting vario-roof that transforms the car from a roadster into a weatherproof coupé in a matter of seconds.

Distinctive character: even more pronounced arrow shape at the front end and a diffuser-style rear end

The designers have given the already dynamic-looking two-seater cult model an even sportier appearance. Eye-catching features include the new-look front bumper with a modified air-dam arrangement and a more pronounced arrow shape. Plus the area around the Mercedes star has been restyled to render it even more succinct. In addition, the designers have modified the rear end by introducing a diffuser-style lower section that makes the Roadster appear more powerful when viewed from behind – an effect that is enhanced considerably by the trapezoidal exhaust tailpipes and the AMG-inspired darkened tail lights. The now larger exterior mirrors feature LED indicators with a pronounced arrow shape, while the range of light-alloy wheels is also almost entirely new.

Many of the interior details have also been redesigned and upgraded following a careful process of material selection. Particular importance was attached to optimising the interior to make it even more driver-oriented. Centrepieces include a new three-spoke sports steering wheel with multifunction buttons and a new instrument cluster with captivating dial surrounds.

This is a 14-year+ news article, from our Mercedes Benz archive, which dates back to the year 2000.