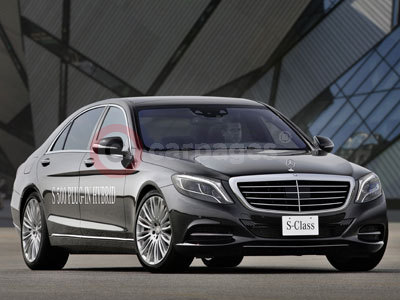 The S500 is powered by a 3.0-litre V6 turbocharged petrol engine coupled to an 80-kW electric motor. Unlike the S 300 BlueTEC HYBRID and S 400 HYBRID the S500 is a plug in hybrid which means it can be charged from an external source. In ideal conditions the S 500 PLUG-IN HYBRID can operate on electric power for 18 miles

There are four hybrid modes which are selected at the push of a button, HYBRID (let the S500 decide), E-MODE (pure electric power), E-SAVE (pure petrol model, save the battery for later use) and CHARGE (charge the battery whilst driving).

Cleverly using navigation data from COMAND Online the operating strategy of the hybrid drive system not only accounts for the current driving condition and driver input, but also adjusts to the likely route (inclines, downhill stretches, bends or speed limits) for the next five miles. The goal is, for example, to use the energy content of the battery for propulsion ahead of a downhill stretch in order to recharge it while going downhill using recuperation.

Under the conditions specified by the certification rules the S-Class as a full hybrid generates CO2 emisisons of 69(g/km) grams per kilometre with fuel consumption equivalent to 94.2 mpg on the combined cycle.

It will be debuted at this month’s Frankfurt Motor Show, and should go on sale later in the year.

We will have pricing information shortly.

This is a 8-year+ news article, from our Mercedes Benz archive, which dates back to the year 2000.

If in doubt check with your local Mercedes Benz dealer as car prices and technical data will have changed since 2013.

Mercedes Benz S-Class Images may not be UK specification cars. Colours and exterior and/or interior elements may differ from actual models.