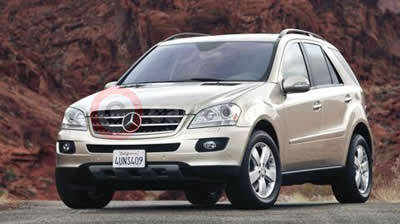 Detroit - The North American International Auto Show in Detroit provides the stage for the world premiere of the new M-Class from Mercedes Benz. The trendsetter among modern off-roaders has stepped up another gear: with state-of-the-art technology such as three powerful new engines, the standard-fitted seven-speed automatic transmission 7G-TRONIC, a 4ETS four-wheel drive system that is more effective than ever, AIRMATIC air suspension and the anticipatory occupant protection system PRE-SAFE, the M-Class is set to reaffirm the off-roader's leading position in a fast-growing market segment which Mercedes Benz itself created with the preceding model in 1997. After its premiere at the Detroit Auto Show, the new M-Class will be launched on the US market in the spring, Europe this summer and the UK in autumn.

In Detroit, the new M-Class will be sharing the limelight with two show cars which together provide a perfect demonstration of the tremendous potential that the sports tourer concept developed by Mercedes Benz holds for the future. The Compact Sports Tourer "Vision B" debuts in the US alongside the Grand Sports Tourer "Vision R" to give visitors to the show a fascinating preview of two future model series from the Stuttgart-based automotive manufacturer. The perfectly honed dimensions, design and dynamism shared by the two Sports Tourer models give the ideal credentials for relaxed, pleasurable motoring. Also celebrating its US premiere at the Auto Show in Detroit is the CLS 55 AMG developing 476 hp.

One glance at the design of the new M-Class leaves no doubt as to its majestic character. The swept-back windscreen, striking front wings and rising waistline of the new car set the unashamedly sporting tone, a theme developed by the proportions of the body: the new M-Class is 150 mm longer (now 4780 mm), 71 mm wider (now 1911 mm) and 5 mm lower (now 1815 mm with roof rails) than its predecessor. The wheelbase has grown by 95 mm to 2915 mm.

Three of the four engines available for the 2005 model are new and outstrip the output and torque of the power units fitted in the outgoing model to the tune of up to 38 per cent. Cutting-edge drive-system technology and streamlined aerodynamics (the Cd value is down to 0.34 from the previous 0.40) combine to cut fuel consumption by as much as 10 per cent.

A new V6 diesel engine, available with two different outputs, is celebrating its premiere. It features third-generation common-rail direct injection and the latest in piezo injectors. The unit in the ML 320 CDI delivers 224 hp and places a maximum torque of 510 Nm on tap from 1800 rpm. Also on hand to offer the twin benefits of six-cylinder comfort and dynamic performance is the new ML 280 CDI, serving up 190 hp and a peak torque of 440 Nm. The diesel models burn just 30.1 mpg (combined), making the new M-Class one of the most economical off-roaders in itS-Class. Another new arrival is the V6 petrol unit powering the ML 350, with 272 hp and a maximum torque of 350 Nm. The engine range is headed by the eight-cylinder in the ML 500, which now has an output of 306 hp.

The matchless seven-speed automatic transmission 7G-TRONIC is fitted as standard in all variants of the new M-Class. Intelligent shift management allows the transmission to make optimum use of the engine's enviable reserves of power, while making a major contribution to fuel economy. For the first time, the 7G-TRONIC transmission is operated electronically using a selector lever positioned close to the steering wheel, a new technology which Mercedes Benz has christened DIRECT SELECT. Additional steering-wheel shifter buttons enable the driver to glide manually through the seven gears.