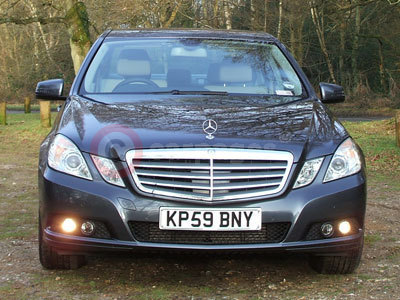 When the new Mercedes Benz E-Class arrived in showrooms in mid June of last year (2009), it was regarded in some circles as Mercedes Benz returning to its roots.

Well not quite back to the very beginning but the new car certainly has a hint of nostalgia for things past. This is especially noticeable on the dashboard where the almost regimented lines could look old fashioned, if it wasn't for the modern switchgear and crisp digital graphics.

But where are its roots? Well, the new Mercedes Benz E-Class has been inspired by the Ponton. This was a car built in 1953 and one that lays claim to being the first car to be 'spy photographed�, while it was being tested a year earlier.

A pinch of Ponton can be seen in the muscular rear haunches and strong design lines that define the rear wheelarches and sharply emphasise the shoulder line of the new car. It also has the effect of making the car look longer than its 4,568mm. Parking sensors are a standard feature, which is probably just as well as the length of the bonnet is deceiving, and the car overhangs standard parking spaces.

The front end features vary according to the trim level; the Avantgarde has a unique front bumper and a larger lower grille than the SE. It also has LED daytime running lights while the Sport has similar styling to the mighty AMG version, complete with side skirts and front and rear aprons.

What they all have in common are the twin headlight clusters, which became a distinguishing feature in 1995 and have developed over the years, to the sparkling geometric shape we have today. Generally, where the previous model majored on curvaceous styling with oval headlamps, the new Mercedes Benz E-Class is a much sharper and more angular interpretation of the long-serving and popular range.

The Mercedes Benz E-Class heritage can be traced back to 1947 and the Model 170 and since that time, we are told that Mercedes Benz has produced over 10million saloons in the series. The company also says that these numbers make it the world's most successful business saloon.

Prices start at £25,570 OTR, which is not a million miles away from the top end Ford Mondeos and easily on a par with the Jaguar XF, which I imagine is its main competitor. That price is for the Mercedes Benz E200SE with 6-speed manual gearbox and, excluding the AMG version at £71,355, the most expensive Mercedes Benz E-Class is the E500 Sport with 7G-Tronic automatic transmission, at £48,610.

This is a 11-year+ news article, from our Mercedes Benz archive, which dates back to the year 2000.

If in doubt check with your local Mercedes Benz dealer as car prices and technical data will have changed since 2010.