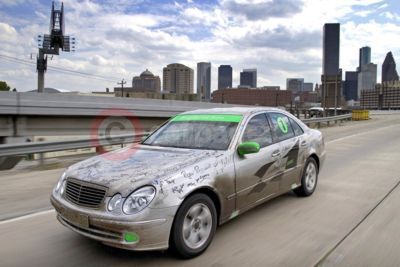 Having established numerous diesel world records, the three standard Mercedes Benz E 320 CDI models have continued to make headlines. Following their 30-day, non-stop trial on a five-mile oval circuit in Laredo, Texas, the saloons achieved a new record during a fuel consumption test drive. The standard E 320 CDI models covered 1039 miles on one tankful of fuel resulting in a fuel consumption of only 59.46 mpg.

Under the supervision of the USAC (United States Auto Club), which monitored the run on behalf of the FIA, the unmodified vehicles drove from Laredo on the Mexican border to Tallahassee, Florida. At the start of this economy run through Texas, Louisiana, Mississippi, Alabama and Florida, USAC employees sealed the full 80-litre standard fuel tanks of the three vehicles.

Additionally, the USAC calibrated the speedometers and supervised the two-day economy drive along the speed-controlled American highways in accompanying vehicles. The result was that on just one full tank, the three E 320 CDI models covered a distance of 1039 miles (1672 km). The average fuel consumption of all three vehicles was under 58.85 mpg, the best figure being 59.46 mpg.

On April 1, 2005 Mercedes Benz lined up three cars for a world record attempt on the high-speed circuit in Laredo, Texas. All completed 100,000 miles without problems, providing triple proof of the reliability of the E-Class. Each E-Class covered 20,000 laps, testing the powertrain, suspension, electronic components and body structure to the utmost. In addition to 22 international class records, the Mercedes Benz E 320 CDI models established world records by covering 50,000 miles at 140.37 mph and 100,000 miles at 139.69 mph.