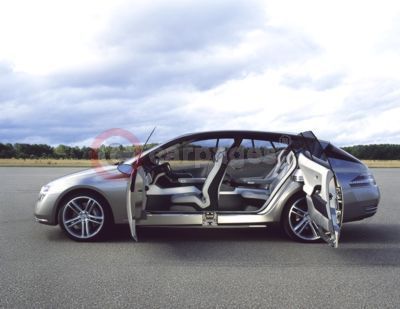 Mercedes Benz has an enviable reputation for building and exhibiting show vehicles, and then installing the “fantasy ideas” into its passenger car range. Indeed, the latest S-Class Saloon and CL-Class Coupé bristle with world-first innovations that first appeared in a research car only three years ago.

Night View Assist, a new system that uses infrared technology to display an image of the road ahead, is one of several cutting-edge innovations in the new Mercedes Benz S-Class and CL-Class. This night-vision system was first seen in the F500 Mind research car of 2003 and can improve the driver’s night time visibility by up to 125 per cent, compared with traditional halogen headlamps.

These luxury models also feature a programmable multivision dashboard display, developed from the F500 Mind, as well as DISTRONIC Plus, an adaptive radar-guided cruise control system derived from the 1991 F100 research car. This uses a radar sensor in the front grille to keep the car a safe distance from the vehicle in front - even in stop-start traffic.

This long tradition of transferring the technology showcased in its research vehicles to the real-world in production models gives Mercedes Benz customers the benefit of the very latest in world-leading, cutting-edge technology, often years before the innovations feature elsewhere.

The F100 research vehicle showcased several Mercedes Benz innovations including a sandwich floor, designed so that in the event of a frontal impact the engine would effectively be forced under the floor to avoid injury to the driver and passengers. Six years later, the revolutionary sandwich floor was integral to the design of the 1997 A-Class.

The 1995 S-Class Saloon also featured technological advances adapted from the F100 research car, including gas-discharge (xenon) headlights, which give clearer and brighter light projection, and a rain sensor, which automatically activates the windscreen wipers when needed. The S-Class was also the first production car to feature the Mercedes Benz navigation system, showcased in the 1995 Vario Research Car. Initially restricted to central London, current COMAND navigation systems cover the whole of western Europe.

Xenon headlights, auto wipers and satellite navigation have been fitted as standard to a number of Mercedes Benz models, and are now becoming commonplace in other vehicles.

In the same year as showing the F100, Mercedes Benz also unveiled the high-performance C 112 research car, with Active Body Control (ABC), first introduced to a production vehicle - the CL-Class - in 1999. The active suspension system uses a network of sensors around the car to measure and control body motion to make the ride smoother and virtually eliminate body roll whilst cornering, accelerating and braking. The latest version of ABC made its debut in the New Generation SL-Class Roadster earlier in 2006, and will also feature in next year’s CL-Class.

The radical F300 Life Jet three-wheeler of 1997 was not only a departure for Mercedes Benz in proving that its designs are not limited to four-wheels, but was also the first vehicle to feature a sensor to automatically turn on the headlights, which was used in the 1998 S-Class, and is now standard on most Mercedes models. The system constantly monitors and adapts to the ambient light conditions, activating the headlights accordingly.

Mercedes Benz continues to offer its customers world-leading technology in its production vehicles, with the new CL-Class and S-Class models featuring two of the very latest developments. The new Intelligent Light System has five different lighting functions and is derived from the system in the 1996 F200 Imagination concept car. The previously unseen Brake Assist Plus, which is constantly monitoring for an impending collision, made its debut in these new models, just as Electronic Stablility Program (ESP) was first seen in the 1995 S-Class. Such innovations demonstrate that Mercedes Benz vehicles are still some of the safest and most technologically advanced in the world.

The most recent research vehicle, the 2006 F600 HYGENIUS, features a fuel-cell drive system and the most advanced PRE-SAFE occupant protection system yet. With a range of some 250 miles and power output equivalent to 115 hp, the advanced fuel-cell system represents another ground-breaking Mercedes Benz innovation that could become a production reality in the next decade.

With constant, world-leading advancements in vehicle technology, the future holds more exciting innovations for the next generation of Mercedes Benz cars.

If in doubt check with your local Mercedes Benz dealer as car prices and technical data will have changed since 2006.