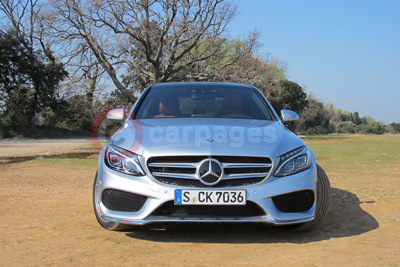 Mercedes-Benz’s C-Class range has a history stretching back to 1982. That was when the first ‘baby Benz’, the 190, was launched. It started a model line that soon became the C-Class, and over the course of 32 years since then it has been a big seller for Mercedes, with 8.5 million of them finding eager customers around the world.

The latest C-Class is the fourth generation of the car, and against increasingly tough competition from BMW and Audi, it needed to up its game. It has. The 2014 C-Class is the classiest yet, with a cabin style and equipment features that have clearly percolated down the range from the luxury S-Class.

The C’s styling has been sculpted to look much more svelte, the cabin has undergone a major upgrade, and both fuel efficiency and CO2 emissions have been improved.

The C-Class now distinguishes itself by being the most aerodynamic model in its category, with an exceptional drag coefficient figure of 0.24 Cd. That, together with some weight-saving measures, has helped to achieve the better mpg and lower emissions.

It hasn’t been done by shrinking the car, though. On the contrary, it is actually a little bigger than its predecessor, but some 40 kg has been saved by changing the body structure to a mixture of 50/50 steel and aluminium.

There is another ‘first’ for Mercedes with this latest C-Class. It is the first car in its category to have air suspension, available as an option called Airmatic. On sale from the spring of 2014, first UK deliveries of the new C-Class are in June 2014.

The most popular version of the C-Class is likely to be the diesel-engined C220 BlueTEC, and that is the one we tested. It has a 2.1 litre, 168 bhp motor and it is a lusty performer, with a 145 mph top speed and 0-62 mph acceleration in around seven and a half seconds.

Even so, economy is pretty reasonable for a car this size at just over 65 mpg on the combined cycle. The 113 g/km CO2 figures puts it in band C for road tax, meaning that the disc is free in the first year and only £30 annually thereafter. That is for the seven-speed automatic. If you go for a six-speed manual gearbox, the acceleration time varies very slightly at 0.3 seconds slower. The economy figure benefits, though, at an impressive 70.6 mpg on the combined cycle, while the CO2 drops to 103 g/km for band B road tax (at £20 a year after the first year).

This is a 7-year+ news article, from our Mercedes Benz archive, which dates back to the year 2000.

If in doubt check with your local Mercedes Benz dealer as car prices and technical data will have changed since 2014.

Mercedes Benz C Class Images may not be UK specification cars. Colours and exterior and/or interior elements may differ from actual models.