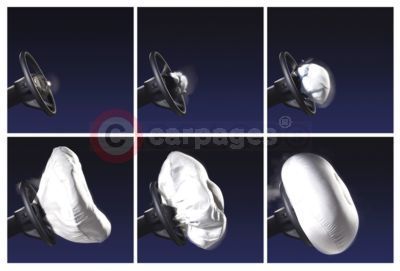 It is now 25 years since the first production car to be fitted with an airbag, an S-Class Saloon, rolled off the production line at Mercedes Benz in Sindelfingen - the culmination of over 13 years of development work and the beginning of a new era in vehicle safety. According to accident research, the airbag has saved over 14,200 human lives in the USA to date; in Germany, meanwhile, the airbag has prevented over 2,500 fatal injuries to car occupants since 1990. Mercedes Benz offered the airbag long before any other car manufacturer and has so far equipped more than 12 million vehicles with this safety innovation. It has been fitted as standard in all passenger cars displaying the Mercedes star since October 1992. In recent years, Mercedes engineers have continued to develop airbag technology, for example by introducing side airbags and systems that adapt in line with the severity of the accident. Airbags are also set to become an integral part of the PRE-SAFE anticipatory occupant protection system, equipped with new, anticipatory sensors which will enable them to deploy in advance of a possible accident so as to reduce the forces exerted on the car occupants both before and during any impact. For the same reasons, the airbags of the future will also take into account individual parameters such as the body size, sex and age of the occupants.

The airbag is very much a part of Mercedes history. Like the crumple zone, safety steering system, seatbelt tensioner, anti-lock braking system and other Mercedes inventions, it is a testament to the pioneering role played by the Stuttgart-based manufacturer in the field of passenger car safety.

The development of the airbag began in 1967 and required pioneering achievements in numerous fields. Although the idea for an air cushion of this kind had been around since the early fifties, engineers had been unable to come up with a solution to transform the vision into reality. However, the Mercedes team had made great progress with a discriminating sensor system and a gas generator capable of deploying the airbag in just 30 milliseconds. They also developed the tear-resistant airbag fabric, improved the airbag's inflation characteristics and finally made it possible to house the entire system in the impact-absorbing boss of a steering wheel.

After more than 250 vehicle crash tests, 2,500 sled tests and over seven million kilometres of trials in test cars, the airbag was finally ready for production in December 1980 when it celebrated its world premiere together with another innovation, the seatbelt tensioner, in the Mercedes Benz S-Class. As early as 1991, some 28 per cent of all Mercedes passenger cars were equipped with a driver's airbag. And it has been fitted as standard in all cars displaying the Mercedes star since October 1992.

Mercedes Benz S-Class Images may not be UK specification cars. Colours and exterior and/or interior elements may differ from actual models.