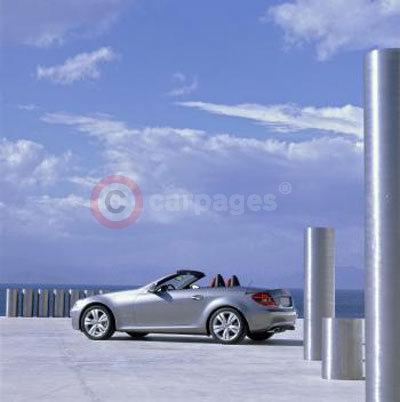 Mercedes Benz is installing the new NTG 2.5 audio and telematics generation in the SLK for the first time. It is easier to operate and offers an even wider range of useful functions. Standard features integrated in every radio include a hands-free system with Bluetooth technology and a new media interface in the glove compartment, allowing the full integration of mobile audio devices such as an iPod, which can then be operated via the audio system's user interface.

Together with the new telematics generation, Mercedes Benz is also offering the LINGUATRONIC voice-operated control system as an optional extra in the SLK-Class for the first time.

Voluminous surround sound even when the roof is open

Passengers can enjoy a unique listening experience, regardless of whether the vario-roof is open or closed, thanks to the optionally available harman kardon Logic7 sound system. Rich and voluminous surround sound makes for crystal-clear listening pleasure, the like of which has never before been associated with a roadster.

The sporty credentials of the 2008 SLK generation are further enhanced by three modified powerplants that consume less fuel and, therefore, emit less CO2. The four-cylinder powerplant in the SLK 200 Kompressor and the six-cylinder sports engine in the SLK 350 both offer substantially more power and torque. Only the SLK 55 AMG retains its familiar engine – an eight-cylinder unit that has lost none of its mesmerising performance capability and remains a unique selling point in the SLK segment.

The Mercedes Benz engineers paid special attention to the fast-running V6 sports engine that makes its debut in the new-generation SLK, totally altering the six-cylinder unit's character by making sweeping changes to the mechanical setup. Although the displacement remains the same at 3498 cc, the engine now develops 224 kW/305 hp at 6500 rpm – some 24 kW (33 hp) more than its predecessor. The peak torque has also been boosted, by 10 Nm, and now stands at 360 Nm when the engine is running at 4900 rpm.

This result was achieved by raising the engine speed limit to 6800 rpm; it can even be increased to 7200 rpm for a brief period – oil temperature and other engine parameters permitting. Other changes introduced include a higher compression ratio, a new intake manifold and an extensively modified valve train.

Further aspects which add to the emotionally charged appeal of the new engine include deliberately powerful sports-engine acoustics with a strikingly emotive sound design when decelerating. In combination with the 7G‑TRONIC automatic transmission, the engine management system also blips the throttle automatically during downshifts. As well as producing an extremely sporty sound, this throttle-blipping function reduces load alteration effects.