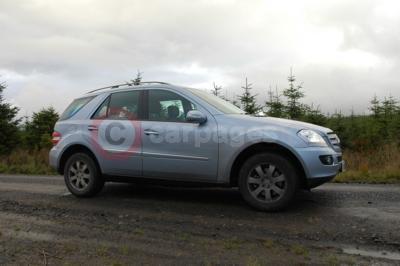 Mercedes Benz M-Class Review | Part One
How It Drove - Performance

We were expecting the ML 280 to feel underpowered and in some situations it was but overall it coped very well with the demanding cross country runs we made across Northumbria. On motorway cruises we saw fuel figures of around 37 mpg although while touring this dropped to nearer 25 mpg. Mercedes Benz quote a respectable 0-62 mph time of 10.4 seconds and theoretical top speed of 125 mph, with a combined fuel consumption of 30 mpg. Out of interest and as a comparison the ML 320 achieves 62 mph in 8.6 seconds and has a top speed of 130 mph and a similar fuel consumption figure to that of the ML 280. The price difference being £1850.

There isn't a manual option and as with all M-Class's our car was fitted with the excellent 7-speed automatic transmission, known as 7G-TRONIC. Gear shifts are pretty much seamless and little catches the automatic box out. If you prefer - gear changes can be made in formula one style by using the switches on the back of the steering wheel. We tended to the leave car in drive and let it take care of itself. We weren't too keen on the steering column mounted gear lever, preferring to select gears from a conventional tunnel mounted lever, but I guess it does free up the transmission tunnel.

The M-Class permanently drives all four wheels through its 4ETS traction system. We are now treated to a Downhill Speed Regulation, Start-Off Assist and the off-road ABS system. The Downhill Speed Regulator (DSR) works in a similar fashion to Land Rover's Hill Descent system, but it also allows the driver to select the speed that they wish to descend an incline via the cruise control stalk. DSR takes complete care of the throttle and braking which is particularly beneficial off-road and when descending icy roads.

We did take the M-Class off-road albeit forest tracks but nothing that really demanded its four wheel drive system. It took everything in its stride but never felt as competent as the Land Discovery 3 that we had taken up the same tracks the previous year.

The M-Class can be ordered with two different variants of the four-wheel drive system, allowing it to meet the varying requirements of off-road drivers. In addition to the basic version, a new off-road package is optionally available which enables the M-Class to cross rougher terrain than the school run demands. Its primary features include a two-speed transfer case with an off-road ratio and manually or automatically selectable differential locks (100 per cent) between the front and rear axle.

The difference in ride and handling between the old M-Class and the new model is like chalk and cheese. This can be put down to European taste rather than the American values of the outgoing model.

At once you feel comfortable behind the wheel although the speed sensitive steering is a little on heavy side it feels fairly responsive. Grip is impressive and you can really press on with the M-Class. Although the Discovery 3 would give it a good run for its money and overall is a better driving experience.

Our test car was fitted with Mercedes' optional AirMATIC air suspension with level adjustment and adaptive damping system at the cost of £1,265. We had already seen this system in the R-Class and the CLS. On the M-Class the AIRMATIC suspension system has been tailored to off-road driving, allowing you to raise the vehicle, effectively increasing ground clearance by 110 mm to as much as 291 mm and the vehicle's fording depth to a maximum of 600 mm. This was particularly useful as we had to cross quite a few deep fast flowing fords. Leaving the car raised off-road leads to a rather wobbly experience.

The AIRMATIC suspension system offers three settings, selected via a switch on the fascia - Normal, Sport and Comfort. The Comfort mode tends make the M-Class flop over uneven road surfaces and is more suited to motorway cruising. Where the Sport mode turns the M-Class into a more aggressive character, allowing you to attack more demanding 'B' roads at quite high speeds by stiffening and adapting the suspension to the driving conditions.

If in doubt check with your local Mercedes Benz dealer as car prices and technical data will have changed since 2006.