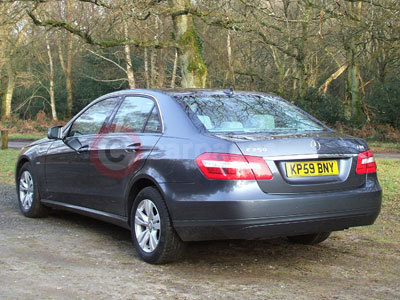 The Mercedes Benz E500 houses a 5.5-litre, V8 engine, which understandably, doesn't fall under the BlueEFFICIENCY banner, but all of the other engines do. Similar to BMW's EfficientDynamics and seemingly equally as incongruous with the perceived power, BlueEFFICIENCY is the Mercedes Benz programme for economical and eco-friendly motoring.

Some heavy-duty testing, both in-house and through simulations of customer's driving profiles, has made it possible for the company to concentrate the efficiency for everyday driving scenarios and has improved the overall fuel efficiency by some 23 per cent.

This isn't simply engine tuning, although there have been many improvements in this regard. The effort has been made right across the board, from the employment of low rolling resistance tyres, an on-demand power steering system, aerodynamics and some other tweaks that, while not enormously significant, contribute to the overall, considerable improvement. ECO start/stop wasn't available at launch but is due anytime now, in the Mercedes Benz E200 CGI.

One particular development is the electro-pneumatically controlled fan shutter. Apparently, air flowing through the radiator and engine bay makes up around 10 per cent of the car's drag. By making the cooling fan an on-demand system and closing off the grille with louvred fins when it is all right to do so, reduces the already good drag coefficient of 0.25Cd by 0.013. Not impressed? Then let me tell you that that equates to a gain of 1.5mpg at motorway speeds.

This is a 12-year+ news article, from our Mercedes Benz archive, which dates back to the year 2000.

If in doubt check with your local Mercedes Benz dealer as car prices and technical data will have changed since 2010.