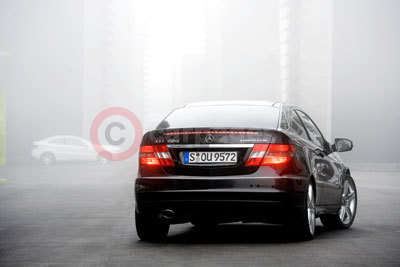 Mercedes Benz offers four four-cylinder and two six-cylinder engines with power outputs ranging from 122 hp to 272 hp for the new CLC. The 184 hp powerplant in the CLC 200 KOMPRESSOR now develops an extra 20 hp while now returning 36.2 mpg – the equivalent of up to 2.8 mpg more than before. The CLC 200 CDI returns a consumption of 48.7 mpg which is improved by 2.4 mpg over the outgoing model. The CDI models boast operating ranges of over 600 miles on a full tank of fuel (62 litres).

Infotainment: state-of-the-art technology for navigation and musical enjoyment on wheels

The Mercedes engineers have developed a new generation of infotainment units for the CLC, bringing luxury-class cutting-edge technology to the Sports Coupé as of September 2008. Three units are available, offering a superb combination of colour display, twin tuner, speed-sensitive volume control and Bluetooth mobile phone interface. An iPod, USB stick or other external audio devices can now also be connected to the infotainment system. A new universal media interface (optional extra) links these devices to the on-board electronics and the Sports Coupé's control system, allowing the iPod tracks to be displayed in the instrument cluster and on the colour screen in the centre console. Tracks can then be selected conveniently using the buttons on the multifunction steering wheel.

The new Audio 50 and COMAND units come with a Europe-wide DVD or hard-disc navigation system. The LINGUATRONIC voice-operated control system, which Mercedes Benz has upgraded with a new whole-word recognition capability, is fitted as standard if the integrated six-disc DVD changer is specified. LINGUATRONIC enables the driver to conveniently operate the telephone, audio and navigation system.

The new CLC is the successor to a successful Mercedes model that boasts some 320,000 drivers around the world to its name since 2001, 45,255 of which were in the UK. The majority of these were new Mercedes customers. Its high conquest rate of some 70 per cent made the Sports Coupé one of the most successful models in the Mercedes strategic product initiative. With the help of a compelling two-door model, the Stuttgart-based car maker has managed to fire customers' imagination over the long term. Over 40 per cent of buyers opted for a larger Mercedes model after the Sports Coupé and are currently driving an E-Class, CLK or an SLK.

Thanks to its sophisticated design, high-quality equipment and appointments, and enhanced technology, the new Mercedes Benz CLC offers even more conquest potential than its predecessor. The public will get the chance to take a close look at the Sports Coupé for the first time at dealerships in June 2008.

This is a 14-year+ news article, from our Mercedes Benz archive, which dates back to the year 2000.

If in doubt check with your local Mercedes Benz dealer as car prices and technical data will have changed since 2008.

Mercedes Benz CLC-Class Images may not be UK specification cars. Colours and exterior and/or interior elements may differ from actual models.