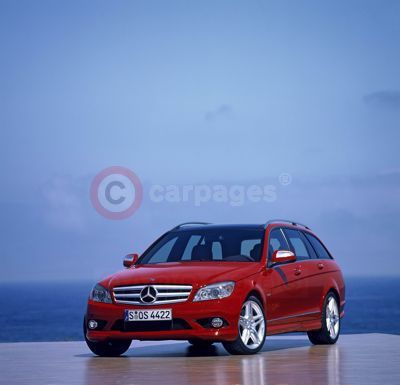 Thanks to a host of practical details, the new Mercedes estate can be loaded more easily, more conveniently and more safely. For instance, two bag hooks and four rings for anchoring loads are included in the load compartment as standard.

Stowage compartments with net covers and a collapsible shopping crate can likewise be found in all models, as can the combined luggage cover and retaining net. The new EASY-PACK tailgate opens and closes at the push of a button, representing a first in this segment. Finally, the optional EASY-PACK load-securing kit presents drivers with even more possibilities for both partitioning the load compartment – that measures around 1.80 metres long and up to 1.20 metres wide – and for securing the load being carried.

The new C-Class Estate also makes a perfectly good towing vehicle and, indeed, offers a class-beating towing capacity of as much as 1800 kg. The self-levelling suspension that is optionally available keeps the vehicle at a constant ride height regardless of the load it is carrying.

Accredited environmental protection: a 12 per cent cut in fuel consumption

Environmental considerations played a key role in the development of the Mercedes Benz C-Class from the very start. This is corroborated by the Environmental Certificate that was awarded by the TÜV Technical Inspection Authority in Germany. Mercedes Benz is the only automotive brand in the world to have obtained a certificate under the terms of ISO standard 14062 for environmentally acceptable product development.

With brand new or redeveloped engines under the bonnet offering greater power and torque, the C-Class Estate consumes up to 12 per cent less fuel than previously. The four-cylinder power units were the focus of the development work: in the case of the C 180 KOMPRESSOR and C 200 KOMPRESSOR petrol models Mercedes Benz modified the engine management and fitted a more dynamic supercharger and improved pistons to boost output by 13 hp and 20 hp respectively. At the same time, the fuel consumption figures for the two models could be cut by as much as 10.3 per cent to 36.7 and 36.2 mpg.

Mercedes Benz gave the four-cylinder diesel engines a thorough overhaul too, making improvements not only to the injection system, the turbocharger and the intercooler but to more than 90 other components too. The upshot is engines delivering more power and higher torque, combined with fuel consumption that is around 12 per cent lower. The new C 220 CDI now has an output of 170 hp (previously 150 hp) and musters up 400 Nm of peak torque (previously 340 Nm) from 2000 rpm. Fuel consumption on the NEDC driving cycle comes in at just 46.3 mpg (previously 40.9 mpg).

Mercedes Benz C-Class Images may not be UK specification cars. Colours and exterior and/or interior elements may differ from actual models.