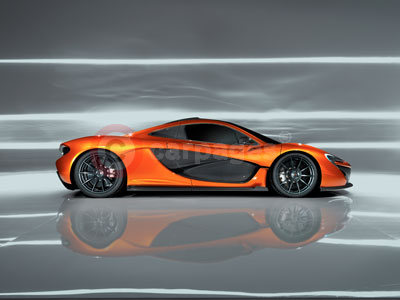 The new McLaren P1 has made its debut at the Paris Motor Show today. It looks like it will be a worthy successor to the 1992 McLaren F1 that redefined what a super car should be.

Although we do not know the price of the P1 but do not expect it to be priced the lower side of £750k - with delivery date late 2013, which will be the 50th anniversary of McLaren.

McLaren have been very secretive about power trains and performance figures but the P1 must be gunning after the Bugatti Veyron's position as the king of the ultra-cars.

We are promised that McLaren is planning a power to weight ratio for the P1 that will excced more than 600PS per tonne.

But as with all ultra-cars the P1 is all about bending the dynamics of car design - the P1 will have much higher levels of downforce than any current road car – 600kg is achieved well below maximum speed. That is approximately five times as much downforce as a McLaren 12C. Its margin over most other high performance supercars is even greater. The McLaren P1's downforce is similar to current sports racing cars, including the 12C GT3 racer.

We do know that the P1 will use the same design principals as the F1 with a mid-engine design that uses a carbon fibre monocoque and roof structure safety cage concept called MonoCage which is a development of the MonoCell used in the current 12C and 12C Spider. The structure of the MonoCage, unlike the 12C’s MonoCell, also serves to guide air into the engine through an integral roof snorkel and air intake ducts, saving further weight. All the body panels are carbon fibre to reduce weight. This carries on a McLaren innovation: it was the first company to offer a full carbon body Grand Prix car (in 1981) and the first to offer a full carbon body road car (the F1).

The large carbon panels are also multi-functional, with integrated scoops and ducts to boost aero performance and cooling. The panels are extraordinarily thin and light whilst being very strong. Lightness, as with all McLaren road cars, was a priority for the McLaren P1. If one component can do the work of two, or more, it replaces the need for separate components. ‘This approach is more weight efficient, but it does require more complex structures, with fewer parts but more design time,’ notes Chief Design Engineer Parry-Williams.

This is a 9-year+ news article, from our McLaren archive, which dates back to the year 2000.

If in doubt check with your local McLaren dealer as car prices and technical data will have changed since 2012.

McLaren P1 Images may not be UK specification cars. Colours and exterior and/or interior elements may differ from actual models.