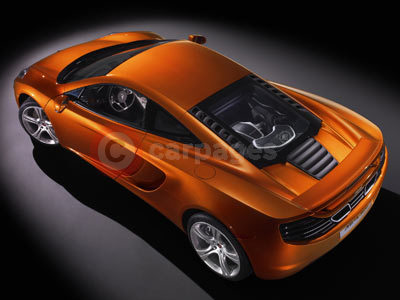 The latest plans for McLaren Automotive's global launch of a range of high-performance sports cars were announced on 18th March 2010 including performance data from recent testing programmes, details of the McLaren MP4-12C's innovative construction, and new technologies inspired by Formula 1.

Indicative performance data from the most recent test sessions are confirming the development team's confidence in producing a car of exceptional out-and-out performance as well as quality, safety, comfort, and efficiency levels. The McLaren MP4-12C is set to present new standards in the sports car market:

Mark Vinnels, McLaren Automotive's Programme Director said: "We are very encouraged with this first release of performance data from the latest XP-Beta development cars. We are focusing on 'real-world' performance that has relevance for 12C drivers on track or on road. As you would expect of McLaren, we are aiming to set new standards for all performance criteria, from top speed to fuel economy, in-gear acceleration to braking distances and carbon dioxide emissions.

Continued development and testing programmes in New Zealand, Arizona, Spain, and at venues including the Nordschleife at the Nurburgring will deliver further performance figures in the summer before the first customer car is built at the McLaren Technology Centre in late-2010.

The innovative one-piece moulded carbon-fibre chassis (the MonoCell) is the key to the McLaren MP4-12C's performance, forming the structural heart of the car, and an ideal occupant cell that delivers exceptional crash test results and a unique driving environment.

The MonoCell's low weight, structural rigidity, dimensional accuracy and innovative four-hour manufacturing process are the factors that support McLaren Automotive's decision to structure its range of cars around this racing-derived technology.

Reducing weight is an obsession at McLaren, borne of the principles that have driven McLaren's racing teams to more motorsport success than any other: recent developments have lowered the MonoCell's weight further to below 80 kilos, whilst continued lightweight engineering supports McLaren Automotive's plans to launch the Mclaren MP4-12C at a lighter dry weight than any competitor at around 1300 kilos.

McLaren Automotive is aiming for the Mclaren MP4-12C to be at least 75 kilos lighter than its nearest competitor and a long list of further lightweight solutions highlights the 12C’s introduction as a new type of sports car, driven by McLaren Automotive's obsessive attention-to-detail. Examples include:

Not only is the McLaren MP4-12C incredibly light and fast, it also features a range of new technologies, many inspired by Formula 1, and all unique to McLaren. In fact, the McLaren MP4-12C has been described as 'pure' McLaren: all content in the car is bespoke to the 12C, from the switchgear to the engine: