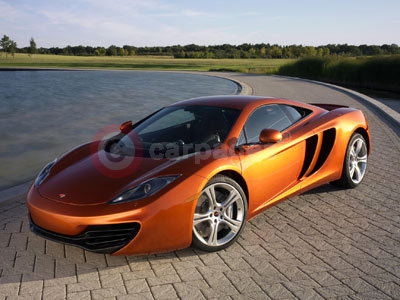 The McLaren MP4-12C, the first in a range of high-performance sports cars from McLaren Automotive, goes on sale in the UK and Europe in spring 2011 at a groundbreaking price for a carbon chassis-based car. At £168,500 in the UK, and from €200,000 in the EU, it will be the only car in its competitor set to:

The McLaren MP4-12C's MonoCell introduces genuine innovation to the automotive industry and new performance standards below £200,000. It is 'pure' McLaren, with all parts, from engine to switchgear, designed by McLaren.

The McLaren MP4-12C can be specified with a wide range of personalisation options, pricing for which will be confirmed at launch. There are 17 high-grade exterior paint finishes, including 'McLaren Orange' - a solid hue that was made famous by the McLaren racing cars of the 1960s and '70s.

A choice of 14 interior trims can be specified inside the cabin. Performance upgrades include a sports exhaust system, carbon ceramic brake discs, polished-finish callipers and two lightweight forged wheel options. The 'standard' McLaren MP4-12C features just one piece of carbon - the MonoCell - but carbon fibre options will include mirror casings, engine bay panels and engine cover.

The McLaren MP4-12C is the first 'pure McLaren' road car, with every one of its components designed specifically for the McLaren MP4-12C. No compromise has been taken in developing the McLaren MP4-12C. An intelligent design philosophy means performance is delivered in abundance, but not at the expense of efficiency: nearly 600 hp at less than 300 g/km CO2 are unprecedented statistics. The MonoCell also contributes to a spacious driver-focused interior that defies the McLaren MP4-12C's compact exterior dimensions.

Designed, engineered, developed and manufactured by a team featuring extensive experience in McLaren's racing successes, up to 1,000 McLaren MP4-12Cs will be built in the car's first full year. A £40m manufacturing plant, the McLaren Production Centre (MPC), is currently under construction on a site adjacent to the MTC and will be fully operational by the middle of 2011. The future range of around 4,000 high-performance McLaren sports cars will all be built annually at MPC.

An initial network of 35 retailers with a passion for McLaren's plans, and a reputation for excellent customer service, will be appointed to represent McLaren across 19 countries worldwide. In the UK, McLaren will be represented initially in Birmingham, London, and Manchester.