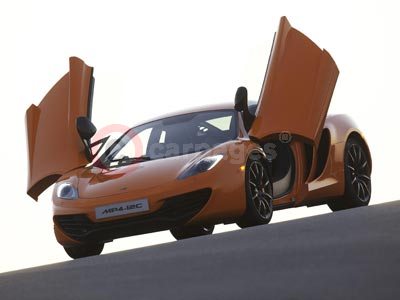 A new £40m manufacturing facility, the McLaren Production Centre (MPC) is currently under construction adjacent to the MTC site, and will open in spring 2011. McLaren Automotive will transfer production of the McLaren 12C from the existing MTC assembly line to the MPC in April 2011.

The first car in the range, the McLaren 12C is now in the final stages of development, and the first stages of production. It has been designed and developed by a world-class team of engineers and test drivers, and will be built to world-class levels of quality and reliability. All development processes have benefited from McLaren's expertise in Formula 1, and constant integration with the racing team's techniques and personnel will set new standards in performance for the road.

Weighing 199kg (439lbs), the M838T features a dry sump lubrication system and a flat plane crankshaft, which has allowed McLaren Automotive's engineers to place the engine extremely low in the chassis, lowering the McLaren 12C's centre of gravity and in turn optimising the car's handling responses.

At the rear, high level exhaust pipes exit the car from a mixing box rather than a conventional silencer unit, saving weight. An optional Sport Exhaust system made from Inconel, an extremely heat-resistant nickel-chromium-based alloy, further reduces weight and enhances the exhaust note.

Mated to the M838T is a dual clutch, seven-speed 'SSG' transmission. Using the Active Dynamics Panel situated in the centre console of the McLaren 12C's cockpit, the characteristics of the SSG transmission can be switched through three different settings: Normal, Sport and Track modes. Each provide a progressive immediacy of gear shift, operated through finger-tip controls mounted on a rocker behind the McLaren 12C steering wheel: upshift by either pulling with the right hand or pushing with the left, and vice versa to downshift. This 'one-hand shifting' principal, and the satisfying mechanical 'click' on gearchange, is reminiscent of the shift mechanics introduced and still used in the Formula 1 cars.

The McLaren 12C will go on sale in Europe in late-spring, North America, the Middle East, and South Africa through the summer and autumn, and Asia-Pacific towards the end of the year. New retailers will be appointed in future years, as the company moves to a global network of around 75 retailers in established and emerging markets. The complete network and production numbers planned will ensure both exclusivity and exemplary service for McLaren customers and profitability for McLaren retailers.