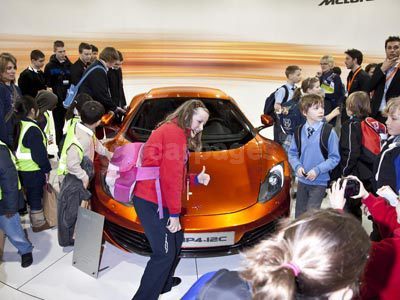 Young people in the UK will be given the opportunity to view the new McLaren MP4-12C sports car up close at 'The Big Bang: UK Young Scientists & Engineers Fair', which is being held at ICC London ExCeL from 10th - 12th March 2011. In an exciting and informative display, McLaren will also present the MP4/1 Formula 1 car, which introduced carbon chassis technology to Formula 1 and the automotive world at its launch in March 1981.

Lewis Hamilton's 2009 Formula 1 car, the Vodafone McLaren Mercedes MP4-24, will also be available to view on the 'F1 in Schools' stand. Chief Engineer of the McLaren 12C, Neil Patterson, will be leading the McLaren Automotive team at the event and has been selected by organizers to take a seat on the judging panel of 'The National Science and Engineering Competition', which is an over-arching and inclusive competition that covers all areas of science, technology, engineering and mathematics. The competition is funded by the Department for Business, Innovation and Skills and coordinated by the British Science Association.

Visiting the Fair to lend his support, the Business Secretary, Vince Cable, stopped to view the McLaren 12C, speaking to McLaren personnel and interacting with students who had assembled on the McLaren stand. He said: "It is heartening to see world leading UK businesses like McLaren at the Big Bang Fair to inspire and encourage our next generation of engineers, scientists and inventors. I'm delighted that McLaren is also supporting See Inside Manufacturing and will be welcoming young people into their factory to see their cars being made."

Having Met the Secretary of State, Neil Patterson said: "The 'Big Bang' is a great opportunity to get young people excited about automotive technology and we're delighted that McLaren have us showcasing a number of pioneering technologies at the event. McLaren introduced carbon into the automotive world by designing a unique, lightweight, safe and strong composite chassis material in Formula 1 thirty years ago. Now we have made these properties available in a sports car that visitors to our stand will get to see first-hand.

"I'm looking forward to introducing young people at the event to our own young team of designers and engineers working for McLaren. Many of my colleagues began as graduates in the automotive industry and subsequently moved on to senior roles within the McLaren Group. I hope that will inspire to those we meet at the event."

This year's fair is preparing for record numbers to attend what is the UK's biggest free celebration of science and engineering for young people. Graduate engineers from McLaren Automotive and McLaren Racing will be on hand throughout the fair to offer visitors advice and a unique insight into what is involved in working with Formula 1 World Championship-winning cars and the technologically-advanced McLaren MP4-12C high performance sports car.

The new McLaren 12C features a unique single-mould carbon fibre 'MonoCell', and will be on display along with a 'naked' McLaren 12C rolling chassis, allowing visitors to The Big Bang fair a unique opportunity to investigate the technology underneath the car's aerodynamic bodywork. McLaren MP4/1, the world's first car to feature a carbon fibre monocoque, will also be displayed alongside the McLaren 12C.