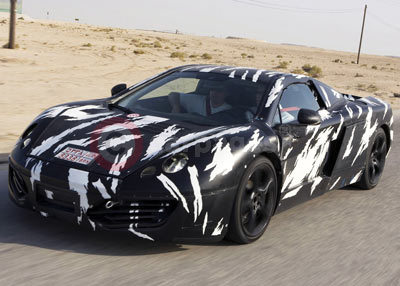 McLaren Automotive has launched the first in a series of broadcast-quality short videos, which present a rare insight into a performance car testing programme from the development team behind the new McLaren MP4-12C.

As a brand new car company, McLaren Automotive has a unique and engaging story to tell prior to its first model going on sale in Spring 2011. Meanwhile, 2009's intense testing and development programme is clearly demonstrating the McLaren MP4-12C's potential and McLaren Automotive is presenting rare company footage and insight that reveals its plans, processes and challenges.

In a short film entitled 'Inside McLaren: developing the MP4-12C', viewers take the first steps to understanding how McLaren Automotive will fulfil its ambition to launch the McLaren MP4-12C as a genuine challenger to the world's best high performance sports cars. Highlights include:

The challenging and comprehensive development programme has taken in some of the world's most famous race circuits and most inhospitable driving environments; from the dry and cold, ice and snow of the Arctic, to the hot and humid, sand-soaked air of the Middle-East.

Dick Glover, Technical Director at McLaren Automotive is responsible for the 50-strong Testing and Development team and the eight development (XP) cars that have featured in the 2009 programme: "I am really proud of what the team has achieved this year," he said.

"Having to develop a brand new range of cars from scratch to the standards expected of McLaren, featuring ground-breaking new structures and powertrain is the ultimate challenge and one we are relishing. Sure, we have challenges - that is why we go to these places that absolutely push the cars to their limits and beyond - but now we know just what the 12C is capable of, we are able to push on into 2010 and deliver cars of which McLaren will be rightly proud."

The 2009 testing programme has focused heavily on two of the most famous tracks in the world - the notorious Nordschleife Nurburgring and the circuit seen by millions on-screen, the BBC Top Gear test track at Dunsfold Aerodrome. Both tracks push cars to their limits. But the success of the programme will also rest on McLaren's technological innovation and experience.

The results of a testing session's road and track performance are rapidly assessed within MTC. Simulation and rapid engineering practices - two core aspects of a successful Formula 1 team - are then employed to re-calibrate the XP test cars in-situ ready for the following day, or night's, development targets.