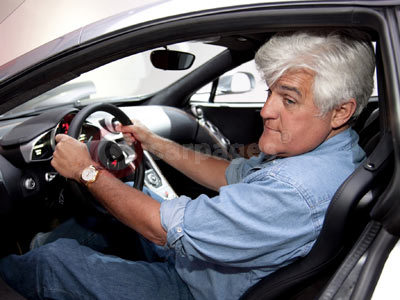 Doing America's most popular nightly TV show ten and a half months a year does not leave many windows for long overseas trips. So, in the summer, between stopping his 17-year run on The Tonight Show and starting The Jay Leno Show, Jay had a rare chance to leave LA behind and jet to England for a week of petrolhead indulgence.

In the space of five days he visited the McLaren Technology Centre, went to The Goodwood Festival of Speed, driving a McLaren F1 Le Mans car up the hill, and appeared on the world's best known motoring TV show, Top Gear.

Leno has not been to McLaren for almost a decade, since he took delivery of his own beloved McLaren F1. At that time McLaren's home was a series of industrial units in Woking's town centre. Now it has a bespoke and modern facility in the Surrey countryside. And seeing the lake-shrouded ying/yang shaped HQ appear through the windscreen impresses the comedian.

The first stop is a studio where McLaren Automotive Managing Director Antony Sheriff shows off the key elements of the new car, the one-piece carbon fibre tub, or MonoCell. Taking inspiration from its racing heritage, the new McLaren MP4-12C is the first car in its market segment to offer such a lightweight engineering solution. It has made this technology accessible to a more affordable sector by pioneering a technique that allows the MonoCell to be moulded in one piece, the only car in the world to feature such a structure. Off this hollow lightweight structure, which sits in the centre of the car, is bolted the rest of the car's components. That means repairs can be made easily. Together Jay and Antony Sheriff lift the MonoCell with ease.

"That's when you're really serious about producing a car with your name on it. The motor really is the heart of it. The idea that you sit down and design what you think the motor should be and how you want it to be. It gives it personality and its own unique sound. That's what it's all about. I mean they build racing cars so they should build their own motor. If they weren't using their own motor I think it would be a whole different ball game and that's the heart and soul of it."

Decisions about the all-important launch colour for the car are in full-swing as Leno makes his visit. Sheriff asks for his opinion. For reference, Jay's McLaren F1 is black. "I like the orange," Leno points out from a palette of colours. It's a buzz to find out just a couple of weeks later that the same colour ends up as the launch colour!

It is then through to a private screening room, where the car's designer, Frank Stephenson greets Jay. Sheriff and Stephenson sit their guest down in front of a screen almost big enough to show the car life-sized. The moment of truth, the first sight of the P11, comes in the shape of an interactive video. Jay likes the flowing lines of the car and the fact it looks like a McLaren. "The thing I like about McLaren is they design the mechanicals first then shape the body over it. This looks like pure design. It looks like they designed the mechanicals of the car and then figured out how to style the body over it."

Lastly, it is down to a viewing room to see the real thing…well almost. Months before the Mclaren MP4-12C is shown to the world, the P11 prototype is close to but not quite the final product. Nevertheless, Jay's reaction is telling.

"Very impressive! It's terrific," he says, hand on chin, as if appraising a piece of art.