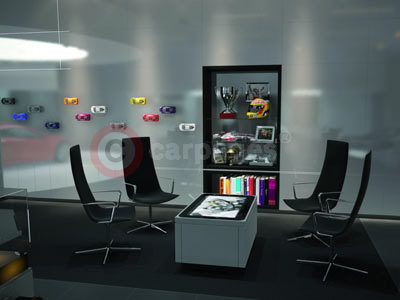 These three outstanding and experienced automotive retailers will begin selling the McLaren MP4-12C from spring 2011 under the names McLaren Birmingham, McLaren London and McLaren Manchester. The UK, along with the USA, will be McLaren's biggest market, and initial interest in the UK for the McLaren 12C already exceeds the first year's allocation. A full model range of high-performance, two-seat, mid-engine McLaren sports cars will be completed by the middle of the decade.

Antony Sheriff, McLaren Automotive's Managing Director: "I am thrilled to announce the relationship between McLaren Automotive and its UK representatives - three of the best car retail businesses in the world. The UK is our home, and the strong demand for the 12C from potential retailers and prospects is evidence of the strength of the McLaren brand in the UK.

"British car enthusiasts are demanding; they enjoy and appreciate performance cars, and traditionally buy what's best - not necessarily what's British. Competing in this market will, therefore, be a major challenge for us as a new sports car company, but McLaren's brand and experience stand us in good stead: the McLaren F1 and SLR projects were perfect benchmarks that provide us with the expertise, commitment and confidence to design, develop and build the world's best performing and highest quality sports cars. We now have the ideal partners in the UK who have enormous experience in delivering extraordinary customer service to help us deliver on those expectations," Sheriff concluded.

The UK retailers will join a global network of 35 partners in 2011 who will be responsible for selling a planned production volume of 1,000 McLaren 12Cs. The European network will also be announced in June 2010, with the North American, Middle Eastern and South African retailers confirmed this summer. The Asia Pacific market will be announced in the autumn, and a handful of retailers will then be added in select mature and emerging markets from 2012 as McLaren moves to a full model range of around 4,000 sports cars by the middle of the decade. McLaren Automotive's aim is for its global network to remain smaller, more flexible, and more profitable than competitors' networks, with a target of around 70 retailers worldwide.