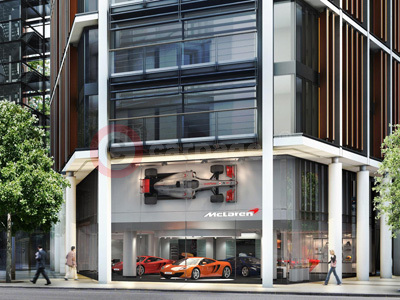 McLaren Automotive and Jardine Motors Group are pleased to confirm One Hyde Park; The Residences at Mandarin Oriental in Knightsbridge as the high-profile and visually stunning landmark location for the McLaren London showroom. McLaren London will move into the showroom in early 2011 in preparation for the spring 2011 launch of the McLaren MP4-12C, the first in McLaren Automotive's new range of high-performance sports cars.

McLaren London at One Hyde Park will represent a true flagship showroom for McLaren Automotive; the architecture of One Hyde Park will establish it as a landmark development, its prime location in Knightsbridge guarantees immediate recognition, and the showroom's exclusivity as just one of the three key retail spaces at the base of pavilions B, C and D ensures a genuinely unique experience for sports car buyers. McLaren London is anticipated to be McLaren Automotive's leading European retailer and, potentially, the busiest in the global network.

The One Hyde Park development consists of 86 apartments and three exclusive retail spaces within three pavilions, B, C and D. The McLaren Automotive showroom will be located on the ground floor of pavilion B, the largest of the three retail units, benefitting from a prime position looking out onto Knightsbridge and strategically placed between Harvey Nichols and Harrods at the top of Sloane Street. Jardine Motors Group will take over the retail space and will commence its own specialist interior fit out to McLaren Automotive visual identity standards in preparation for the launch in early 2011.

The McLaren London showroom also recognises the attraction that Formula 1 commands and the motor racing technology that lies at the heart of McLaren's future sports cars, uniquely displaying one of the team's Formula 1 racing cars.

Following the March 2010 launch of McLaren Automotive as a brand new British sports car manufacturer, over 2,700 potential customers have expressed a 'serious intention to buy' the first car, the McLaren MP4-12C. The first McLaren 12Cs will be delivered in spring of 2011 and, while exact pricing will be confirmed at a later date, the car will sit in what McLaren terms the 'core' sports car segment of cars priced between £125,000 and £175,000.