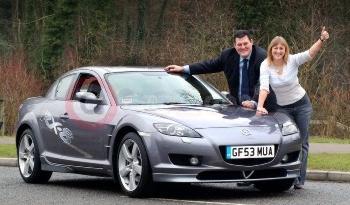 Tunbridge Wells Mazda announces that local woman Isabelle Harman is one of the final 50 candidates in the Mazda RX-8 Formula Woman Championship, which will feature on national television on ITV1 from 23 May 2004.

The Mazda RX-8 Formula Woman Championship is set to change the face of motorsport through the creation of the first UK racing series devoted entirely to female drivers.

Tunbridge Wells Mazda Dealer Principal Geoffrey Seligmann is delighted to support Isabelle as the local Kent representative in her bid to become a racing driver: "We are making sure that Isabelle has all the Mazda RX-8 knowledge she needs to help her get through the Elimination Week and make the final 16 race team. Isabelle had her first chance behind the wheel of a Mazda RX-8 at Tunbridge Wells Mazda and has been speaking to our team to learn more about the car and its unique rotary-powered engine."

Isabelle was amongst over 12,000 applicants who applied to compete in the championship via the Formula Woman website last year. 2,400 applicants were then selected for a series of assessment days at racetracks throughout the UK.

During the Brands Hatch assessment day in November 2003, Isabelle successfully passed a selection of rigorous assessments involving three assessed laps around a racetrack in a Mazda MX-5 with a racing instructor, a media interview test, plus reaction and fitness tests.

Isabelle goes forward next week (8 March) for a boot camp style Elimination Week, which will also be filmed for ITV1, where the final 16 contestants plus reserves will be selected to go through to the race series.

Isabelle has high hopes for the Elimination Week: "I am absolutely delighted to have made it through to the final 50 in the Formula Woman programme. And now that I have sat in the Mazda RX-8 at Tunbridge Wells Mazda, I really hope I get the chance to race one in the championship!"

Geoffrey Seligmann at Tunbridge Wells Mazda added: "We’re all backing Isabelle to get through the selection process because we’d love to be able to cheer on a local star when the race series is shown on television. We’ll certainly be tracking her progress closely.

"We expect the Mazda RX-8 Formula Woman Championship will really capture the imagination of the public – just as the Mazda RX-8 has already caused a real stir since it went on sale last October. With a major ITV1 series planned to go on air from 23 May to cover the selection process and the race series itself, this really is a chance for Isabelle to become a racing driver and TV star!" Geoffrey enthused.