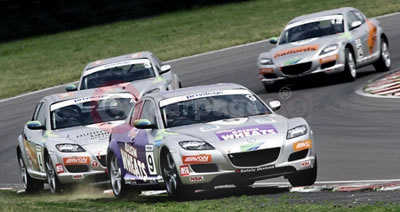 Showing the composure of a seasoned racer, Firman held her nerve in the first race while two of her main rivals, Margo Gardner and Lauren Blighton, crashed out in dramatic fashion. Both girls survived the crash unhurt thanks to the Mazda RX-8 vehicle structure and the high standard of preparation for the race series.

Steve Guglielmi, the independent race preparation specialist who worked on the Mazda RX-8s throughout the Formula Woman series, voiced his surprise at just how tough the car was: "In my experience as a motorsport technician very few road cars could stand up to such rigorous racing like the Mazda RX-8.

"All the race cars were identical to showroom specification cars, with the exception of the brake pads, which were upgraded for race use. The Mazda RX-8 really is a tough car!"

The incident left only Lorraine Pinner with a realistic chance of catching Firman in the second and final race of the series, but Firman did just enough to give her the title.

The action in the finale of the Formula Woman Championship was captured by ITV1 camera crews, currently being televised every weekend as part of the channel’s ‘Speed Sunday’ slot.

Lyn St James – former multiple-Indy 500 competitor and widely recognised as the world’s most successful female race car driver – had flown over from the USA to present the winners’ trophies and even had the chance to drive the Mazda RX-8 race car with Natasha on a VIP driving day at Brands Hatch on Monday.

"I still can’t quite believe it," said Formula Woman Champion, Natasha Firman after the final race of the series. "Jules [Thurston] was challenging very hard in the second race and I was very close to losing it. I was watching my mirrors too much and losing concentration. I soon realised I needed to focus on the race ahead of me and I’m absolutely ecstatic to have won the Championship."

"If just one of the women goes on to pursue a successful motorsport career, Mazda will be delighted to have given these women a chance to make their mark in motorsport."

The cars used in the Privilege Insurance Formula Woman Championship were standard, road-going Mazda RX-8s although the seats and many interior panels were removed, and each car underwent a number of essential safety modifications – including the addition of a roll-cage, fire extinguisher and race seat. The revolutionary 1.3-litre, 231PS RENESIS rotary engine was left unaltered by the race mechanics.