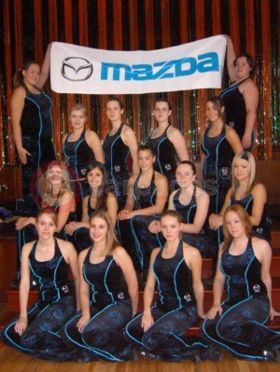 Mazda Motors UK has teamed up with Essex based dance team, Illusion. The 15-strong team compete at dance events around the country and last year were Nationwide Freestyle Champions. This year the team is sporting their new Mazda sponsored formation outfits.

Illusion, with ages ranging from 14-23, travelled to Blackpool last weekend to defend their title but had to settle for second by just one point. The road to the final saw Illusion win the regional heats back in June with their dance to the hit classic 'Rhythm is a Dancer'.

Trained by Linnie Chapple and assisted by Jan Cole, they had to beat off three other teams from the Anglia area. This was the fifth year consecutively that they had qualified for the finals, with the original team having only four members. Since those days Illusion has gone from strength to strength, however it was particularly disappointing to be pipped at the post this year by one point.

School Principal, Lynda King commented, "it's been through hard work and commitment that the team have done so well. It's a shame that there was one point between coming first and coming second. However, the girls are even more determined to work harder and go back and win next year. The fact that the girls enjoy it so much just adds to it."

Another highlight of the weekend was when one team member Laura Cole, who also works for Mazda took second place in the Freestyle Solo's 18-25 years category. Laura competed against 50 qualifiers from around the country to finally be placed second. She is the first competitor from her dance school, Kings Palais to be placed in a National final and is aiming to win her category next year. "It's been a good year for our Dance School because not only are we among the best in the country but we are now being sponsored by Mazda," commented Laura. "Mazda has been great, the team has been supported well by contributing towards the cost of our new outfits."

It now seems that Mazda not only promotes the Zoom-Zoom idea through its cars but is dominating the dance sector as well.