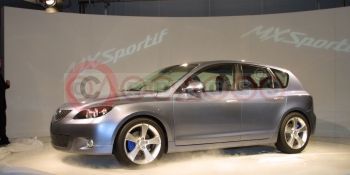 Geneva - Mazda's MX Sportif, unveiled on the eve of the 73rd Geneva motor show in what the company called a ‘sneak preview’ is a clue to the all-new Mazda3, due at the end of the year.

It is what might be called a realistic concept, in the same way as the MX Sport Runabout, unveiled at last year's Geneva show, closely resembled the Mazda2 introduced later in the year.

The Mazda3 will be the fourth new car, following the launch last year of the Mazda6 and the summer launch this year of the RX-8, towards 50,000 UK sales in 2005, said James Muir, managing director of Mazda UK.

The Mazda3 is due on sale in the UK early in 2004. Unlike the Mazda2, it will be built in Japan and is the first car built off Ford's new lower medium platform which will also be shared by Volvo (for its new S40) and will form the basis of the new Ford Focus, currently Europe's second best-selling car.

Mr Muir said that he was hoping to price it aggressively at between £10,995 and £15,500. "Prices will be as close to the transaction price as possible by providing the right specification at the right price. It is good for the customer because there is no point in pricing a car and then offering £2,000 to £3,000 cashback. That just means you got the price wrong in the first place."

The pricing he was aiming at would give good whole life costs and good residual values.

Steve Odell, president of Mazda Europe, unveiling the MX Sportif, said that sales in Europe had been up by 30% in both January and February and he saw that trend continuing through the first half of the year.

Moray Callum, general manager Mazda Design, said that the car had been designed with input from the company’s studios in Germany, Japan and the USA.

"The car would be recognised as traditionally Mazda by its face, grille and headlights," he said. The car from the back had strong shoulders and a unique rear design. "The exterior of the car reflects overall how the car drives and the interior is classic Mazda with a sporty feel."

Mr Muir said that the new range of products would position Mazda between Volvo and Audi as they headed towards their target of 50,000 units a year which would give them a significant presence in the market.