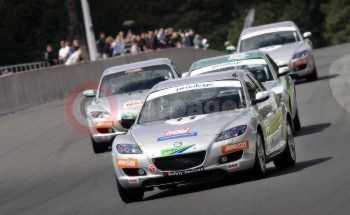 The revolutionary Mazda RX-8 made motorsport history at Oulton Park this weekend with the first two rounds of the first ever all-woman race series – the Privilege Formula Woman Championship on Saturday, (12 June 2004). Natasha Firman, sister to former Jordan F1 driver Ralph, won both rounds, seemingly in a class of her own.

The series sees 16 women from all walks of life, (including a police officer, RAF Pilot, make-up artist and a silk painter), compete in a seven-race Championship driving Mazda’s unique rotary-engined sports coupé, the Mazda RX-8. The race series will be aired on ITV1 from Sunday 11 July in the channel’s new Speed Sunday slot.

The local Mazda dealer to each of the 16 drivers has supported her bid to become a racing driver throughout the build-up to the race series. Each Mazda dealer provided test drives of the Mazda RX-8, product knowledge on the workings of the unique rotary engine and general encouragement by spreading the word that a local woman is about to become a racing driver and thus building the driver’s own avid fan base in their local area.

See local press for details of local events featuring the Formula Woman drivers in your area.

Each dealer will be supporting their local contestants by attending the remaining seven rounds at Knockhill (27 June), Cadwell Park (4 July) and Brands Hatch (25 July).

The first two rounds were keenly fought from start to finish, with the 16 amateur racers demonstrating impressive mastery of their Mazda RX-8 sports coupés as they battled for the initial championship points. Qualifying for the first round was dominated by Natasha Firman in the Halfords-sponsored Mazda RX-8, securing pole with a blistering lap time of 2.09 minutes.