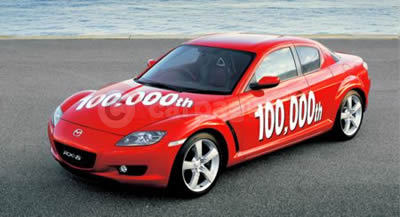 Reaching 100,000 units in 18 months compares favourably with the Mazda MX-5, recognised by the Guinness Book of Records as the world’s most popular roadster, which reached its own production milestone in March when the 750,000th Mazda MX-5 rolled out.

Boasting distinctive sports car styling and excellent performance, the Mazda RX-8 was launched in Japan in April 2003 and is now sold in over 20 countries around the globe.

Mazda RX-8 reached the UK in October 2003 by which time almost 2,000 had already been pre-ordered. Mazda Motors UK has now sold over 9,600 Mazda RX-8s since it was launched and is the biggest European market for the car for September with a record-breaking 1,400 sales for the month. Globally 70,000 units were sold to the end of August 2004 including in excess of 18,000 units in Europe.

Mazda’s RX-8 is powered by the award-winning, naturally aspirated RENESIS engine. The compact, high performance rotary engine is without a doubt Mazda’s spiritual soul and shortly after being launched in 2003 and 2004 was named ‘2003 International Engine of The Year’.

In total, the Mazda RX-8 and its RENESIS engine have won more than 37 important automotive awards around the globe to date, including numerous UK awards such as ‘Best Coupe’ from both BBC Top Gear Magazine and Auto Express in 2004.