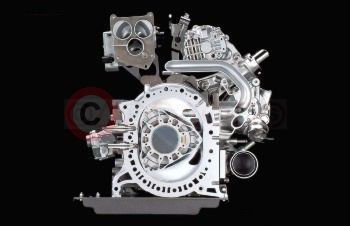 Mazda’s revolutionary RENESIS rotary engine, which powers the exciting Mazda RX-8 sports car, has won the trophy for best engine in the 2.5-litre to 3-litre category at this year’s International Engine of the Year Awards.

This is RENESIS’ fourth trophy in the world’s most coveted engine awards contest. Last year RENESIS won Best New Engine, best in the 2.5-litre to 3-litre Category and was named overall winner as International Engine of the Year, on its way to setting a new record by receiving 44 of a possible 50 votes.

Jeff Guyton, Vice President Finance and Systems, CFO, Mazda Motor Europe was on hand this afternoon to accept the award at the Engine Expo 2004 in Stuttgart, Germany. “After last year’s achievement, I am truly honoured to be able to accept a fourth trophy for Mazda RX-8’s RENESIS rotary engine,” said Mr. Guyton. “On behalf of all of us at Mazda, I would like to thank the organizers for this award and, of course, the journalists who voted for us in this category. That this is our fourth award attests to the fact that Mazda’s long history of rotary engine expertise has paid off, not only for us, but for customers around the world.”

The International Engine of the Year Award is widely recognized as the Oscars for engines and is presented yearly by UK & International Press Automotive Magazines.

This year's panel of judges was made up of 56 highly respected automotive journalists from 24 countries around the globe, including Germany's Wolfgang Peters, Paul Horrell from the UK, and Massimo Nascimbene from Italy. Engines were tested in the cars they power, and were judged according to engine refinement, drivability, environmental-friendliness, fuel economy, performance and desirability.

With its unique centre-opening doors, room for four adults, dynamic design and Mazda's newest rotary engine RENESIS under the hood; Mazda RX-8 was an immediate hit among customers in Europe when it was launched late last year. And its popularity continues unabated. In April this year, Mazda RX-8 had ca. 20 per cent of the European sports car segment.

Its revolutionary RENESIS rotary engine achieves what many in the automotive world felt was not possible. It meets the 2005 Euro Stage IV emissions standard, gets good fuel economy, while retaining the compact size, and high-revving, high performance attributes of its rotary predecessors. It achieves this by including features such as a side-intake and exhaust layout, with larger ports and an expanded air intake.

After test-driving the Mazda RX-8, judge Peter Lyon said of RENESIS, "The most compact little powerhouse on the planet. This superb feat of engineering will spin to 9,000 revs all day long."

Further proof of the sporty, high-revving characteristics of Mazda RX-8's RENESIS engine is the fact that, with 2.6-litre displacement, it was successful against larger 3-litre engines powering such cars as the BMW 730d and the Mercedes C-Class.