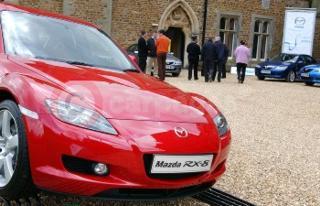 Reliability, style and image are three of many crucial factors considered by fleet managers and employees in deciding which cars will appear in the company car park and Mazda’s new model line-up earned the thumbs-up on all counts at this month’s fleet roadshows.

Fleet decision-makers have been enjoying the ‘zoom-zoom experience’ as the fast-growing fleet manufacturer embarked on a four-stage nationwide tour with its full range of cars, including the new Mazda3 diesel, which joins the Mazda3 petrol, multi-award winning Mazda6 and the sporty Mazda RX-8, which is fast establishing itself as a user-chooser favourite.

The first roadshow was held at Fawsley Hall, Daventry, on Tuesday (20 April), ironically on the day that the influential 2004 J. D. Power and Associates Customer Satisfaction Survey – based on the verdicts of more than 23,000 vehicle owners – rated Mazda as the third best carmaker, after Lexus and Skoda, and the most improved of the 33 manufacturers listed.

With five Mazdas in the top 20 of 120 cars rated and three class winners, a better win-rate than any other manufacturer, the survey concluded: ‘All these results are underpinned by excellent reliability and strong scores for driver appeal. Dealer service is also top-notch.’

It was such comments that were seized upon by fleet bosses taking to the wheel of the Mazda range at the fleet roadshow with Tom Manahan, group fleet administrator at the Alliance & Leicester, saying: ‘A lot of company car drivers have chosen the Mazda6 because its style and image is different to anything else on the road in the sector.’

The bank operates a fleet of 630 cars with a further 240 employees taking a cash alternative to a company car and Mr Manahan added: 'Until the Mazda6 came along we just had the MX-5 on the fleet. But we have two RX-8s on order and I think that the car will become increasingly popular for people opting for cash and I think the Mazda3 will find a place on our fleet. The whole Mazda package is attractive to drivers.'

After the first quarter of 2004, Mazda's UK sales are more than 44% up on the same period last year at 14,171 units and Martin Ward, national research manager at used car bible CAP, said, after driving the Mazda3 diesel for the first time: 'The interior quality, fit and finish is as good as the best of the German premium brands, the car looks good and Mazda reliability is a given.'

Mazda has transformed itself in the last two years and the launch of the Mazda6 has opened significant fleet doors for the marque. Mr Ward said: 'Now Mazda has a solid range of cars with a strong image backed by a good dealer network and the company is led by an excellent management team who are very visible in the marketplace.'

District nurses and other community-based health service staff know exactly which leased car they want to drive and Mazda being 'the new kid on the block' is set to gain in popularity, according to Robin Hinton, in charge of the 1,400-strong fleet at Peterborough-based Anglia Support partnership NHS.