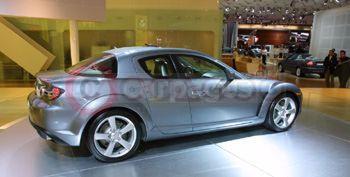 Mazda UK plans to increase its sales by a third in Britain this year on the back of two new models to join the Mazda6, launched in the middle of 2002.

It will also be relying on the astonishing performance of the MX-5 sports car which is still breaking sales records nearly 12 years after it was first launched.

Marketing director Rob Lindley said that with the arrival of the Mazda2 small car in March and the RX-8 sports car in July, Mazda is looking to push sales up from 29,000 last year to 39,000 in 2003.

Sales of the Mazda2 will be restricted, however, as it is reliant on production line availability at the factory it shares with the Ford Fiesta in Valencia, Spain.

"Our volume expectations for the Mazda2 are quite modest," said Lindley. "We will only be able to get around 4,500 vehicles a year from the factory but I don’t see that as a great problem. This is a very competitive sector of the market and the profit margins are lower. I would rather we had sales pull for the vehicle rather than a production push."

The Mazda2 will be powered by 1.6, 1.4 and 1.2-litre petrol engines plus a 1.4-litre common rail diesel engine for the first time. "This means we will be able to have both sporty and economical versions of the car, something we never had with Demio," said Lindley.

The launch of the Mazda2 will be backed by a £3 million television advertising campaign starting in March.

Aspirations are much greater for the RX-8 however. Seen as a successor to the RX-7, Lindley said the new sports model will be a much more mainstream vehicle.

The full production version of the RX-8 was shown at this week’s Detroit Motor Show and Lindley said comparisons with the old and new models were few, apart from the fact that they are both powered by a rotary engine.

The main difference will be in pricing with the RX-8 being "spectacularly attractive" according to Lindley.

"The RX-7 was a £30,000 2+2 sports car and was notorious for its high fuel consumption. RX-8 is a full four-seater and nowhere near as uncompromising. The engine is much more fuel efficient and there have been great improvements to emissions."

It will come loaded with luxury and safety equipment including a nine-speaker Bose sound system.

Meanwhile the two-seater MX-5 continues to be a huge success with 7,150 sales in the UK last year an all-time record. This car is not due to be replaced until 2005.