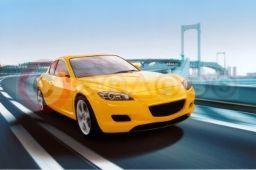 At the recent Detroit Motor Show Mazda outlined details of its next generation RENESIS rotary engine that will power the stunning new RX-8.

Mazda first started to develop the rotary engine in the 60s, each development improving in power and reliability. In 1991 a Mazda 1.3-litre rotary engine powered the first Japanese manufacturer to the Le Mans crown when the Mazda 787B was driven to victory in the 24-hour endurance race by British driver Johnny Herbert proving the reliability and performance of this unique engine.

Much of the information and technology from Le Mans has been used in the development of subsequent engines and the RENESIS is the latest offering from Mazda. Reliability is unquestionably as good as any Otto cycle engine, but engineers are able to manufacture a physically smaller and lighter unit that offers far greater power than the equivalent sized conventional engine.

One of the key areas that chassis engineers concentrated on was the RX-8’s responsive handling and performance, in order to deliver driving pleasure far beyond the normal. A key factor in achieving the RX-8’s unrivalled performance and superb handling is its light weight, perfectly balanced 50:50 weight distribution, and low yaw-inertia moment and centre of gravity.

A major contribution to this weight distribution and the front-midship layout is the RENESIS engine. Naturally aspirated, the RENESIS is smaller and lighter than Mazda’s previous turbo rotary engine (13B-REW), and it is only 338mm high, the same as the transmission. This made it possible to mount the engine about 60mm further rearward and some 40mm lower than in the RX-7, which already has the engine’s centre of gravity behind the front axle.

As a result, RX-8 has perfect 50:50 front/rear weight distribution, a low yaw-inertia moment and a centre of gravity the same as the RX-7. In addition, the RX-8 offers nimble, controllable performance and stable high-speed handling thanks to its 2,700mm wheelbase.

The engine itself has been redeveloped for greater power and reliability; it now features a side-intake, side-exhaust layout, with the exhaust ports moved to the side housing of the rotor chamber. This allows the size of the ports to be freely set, resulting in an expanded air-intake port area – 30% larger than in conventional rotary engines – greatly improving intake resistance and contributing to the high maximum output targets of 184kW (250PS)/8,500rpm and maximum torque of 216Nm (22.0kg-m)/7,500rpm even with natural aspiration.

In addition, the adoption of dual exhaust ports for each chamber achieves twice the port area of conventional designs and also allows exhaust port timing to be delayed for increased thermal efficiency in the expansion process. Unburned hydrocarbons are retained for combustion in the next cycle, which greatly reduces emissions. A three-stage induction system, featuring shutter valves at the intake ports of each rotor, utilise the incoming air’s dynamic charge effect and improve filling efficiency, while twin electronic throttles precisely and flexibly control the valve operation. Furthermore, a wet-sump lubrication system with oil-pan height just half that of conventional designs also reduced engine size and weight.

The engine is not the only unique feature of the RX-8; with its freestyle doors it is able to offer a true four-seater layout in a coupe body style with none of the compromises in access and egress of traditional coupes.

This is one of the most exciting cars to come from Mazda for many years and promises to be a popular car in the UK when it goes on sale in 2003.