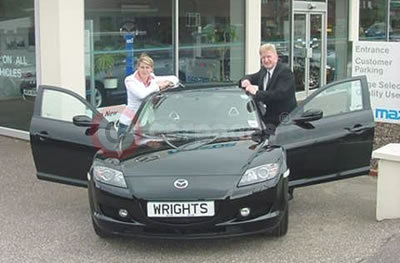 MOTOR racing fans from Norfolk will be cheering on local girl Natasha Firman in the finals of the UK’s first ever all-woman race series at the weekend.

Natasha, from Attleborough, is points ahead of the other 15 drivers in the Privilege Insurance Formula Woman Championship as they prepare for Brands Hatch on Sunday (July 25) and is supported by local Mazda dealer Wrights Mazda of Norwich.

The 28-year-old has motor racing in her blood – her father, Ralph, founded Van Diemen International Racing Ltd and her brother, also called Ralph, is a former Jordan F1 driver.

Natasha has been favourite to win the championship from the start when she won the first two races staged at Oulton Park in Cheshire.

She now has 125 points, followed by Margo Gardner, from Stirling, with 112 and Emma Hayles, from Wiltshire, with 110 points.

Staff and motorsport fans from sponsor Wrights Mazda, of Cromer Road, Norwich, are hoping to watch her win the championship trophy on Sunday.

Dealer principal of Wrights Mazda, Russell Wythe said: "I’ve contacted Natasha to wish her all the best of luck. She has been consistent throughout the series, never in lower than third or fourth place, and that has kept her at the top on points.

"I couldn’t be more chuffed than to have a lady from Norfolk in the lead. Hopefully, this will be the start of great things in racing for Natasha.

"The reaction from customers has been astonishing. People have been flocking into the showroom, since the ITV1 series began a couple of weeks back, simply asking about Formula Woman and hoping to see a Mazda RX-8 race car. They will have to go to the final at Brands Hatch this Sunday to see one!"

Natasha, who for years watched brother Ralph race, now has the chance to show what she can do.

"My aim is get the car in pole position. If I do that I should be able to hold the lead. It is very, very important to be quick," said Natasha.

"It is a very close championship and wide open at the moment – anything can happen."

Natasha, who has just completed a Masters degree in property evaluation and law, is set to start a job as a chartered surveyor. But, she says, if the opportunity arises, she will also pursue her passion for motor racing.

"The Formula Woman championship has been an amazing experience with Mazda and it has given me the buzz. Motor racing has been a male dominated sport, but there is no reason women cannot compete on a level playing field."

She was selected to take part in the event after an elimination process, which began with 10,000 applicants. Each amateur driver is provided with a race-prepared Mazda RX-8 sports coupé in which to battle for championship points.

To buy tickets or find our more about the championship visit www.formulawoman.com