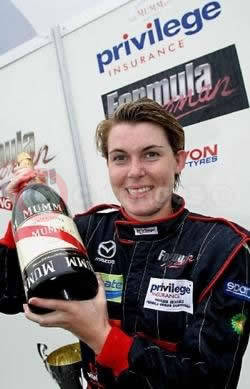 Natasha Firman won the inaugural Privilege Insurance Formula Woman Championship on Sunday (July 25) after claming impressive podium finishes in two incident-packed races at Brands Hatch. Showing the composure of a seasoned racer, Firman held her nerve in the first race while two of her main rivals, Margo Gardner and Lauren Blighton, crashed out in dramatic fashion. The incident left only Lorraine Pinner with a realistic chance of catching Firman in the second and final race of the series, but Firman did just enough to give her the title.

As well as being crowned Privilege Insurance Formula Woman Champion 2004, Firman will now get a chance to prove herself against male drivers with a seat in the Formula Palmer Audi Winter Series. She will also have a test next year with Team Dynamics Honda, a British Touring Car Championship (BTCC) team, as part of an initiative organised by Tim Harvey, 1992 BTCC drivers’ champion and the chief instructor for the Formula Woman race series.

Lyn St James - former multiple-Indy 500 competitor and widely recognised as the world’s most successful female racecar driver – had flown over from the USA to present the winner’s trophies.

"I still can’t quite believe it," said Formula Woman Champion, Natasha Firman after the final race of the series. "Jules [Thurston] was challenging very hard in the second race and I was very close to losing it. I was watching my mirrors too much and losing concentration. I soon realised I needed to focus on the race ahead of me and I’m absolutely ecstatic to have won the Championship."

"Right from the first race at Oulton Park, Natasha [Firman] has looked like she had the talent and maturity to win this Championship," commented Formula Woman series founder, Graeme Glew. "We’re delighted to be able to line up several drives for her so that she can go on to demonstrate her newly-honed skills against male drivers. I have every confidence she’ll do extremely well.

"This Championship has been all about proving that gender has no bearing on the performance of drivers in modern motorsport, and I hope that the example of Natasha and the 16 other talented Formula Woman drivers will encourage more women to get involved in the sport."