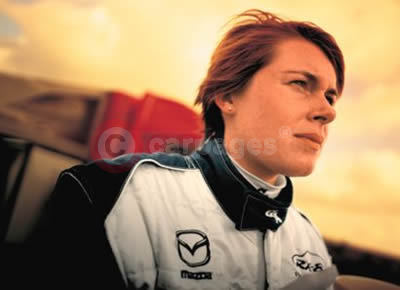 Formula Woman race champion Natasha Firman is bubbling over with excitement about the prospect of her future in motor sport. But Natasha, aged 28, who won the UK’s first ever all-woman race series in a Mazda RX-8 in July 2004, is keeping quiet for the moment about the possibilities now before her.

"I am keen to race and very excited about being able to take it forward another step," she said during a break from a busy day as a trainee chartered surveyor at international company Knight Frank in the City of London.

Natasha earlier this year set a string of endurance records, adding to her motor sport trophy cabinet, and is now hoping to add to them with more endurance racing in 2005.

Her dream of pursuing her passion for motor racing was strengthened in October when she took part in a 24-hour endurance record attempt in Germany.

Natasha, who comes from Attleborough in Norfolk, was one of a team of 16 drivers who drove two Mazda RX-8s around the 12.3 km oval in Papenburg, smashing a total of 40 international records between them. Speeds averaged 212.835 km/h and 215.934 km/h around the banked circuit near Hamburg.

Many of the records were smashed by Natasha herself. They ranged from clocking 144.332 miles per hour over 1000 metres with a flying start and over 93 mph over a mile from a standing start, for example.

The records held individually by Natasha are:

Sharing the car with 15 other European journalists she contributed towards a further 11 rotary records and with a second Mazda RX-8 helped Mazda set a total of 40 speed and endurance records for rotary engines.

"I was fully aware I was setting records as I drove and it was an exhilarating experience. The circuit is amazing. I had never been on one like it," said Natasha.

"It seemed absolutely vast and daunting with the banked corners. I was used to being in the RX-8, but to take it at 150mph around a banked corner in the dark was a new experience.

"But, although I had my reservations, it was exhilarating. To be part of the whole experience was incredible and certainly a steep learning curve. The endurance test showed that the Mazda RX-8 is reliable in those conditions for 24 hours."

Each driver undertook around 90 minutes of night driving as well as a daytime spell. Natasha said it felt quite lonely, isolated in the dark when she could only see what the headlights picked up.

But the racing ace was undaunted and comfortable in a car she was familiar with. Natasha drove one of the special race-prepared Mazda RX-8s used for the Formula Woman series.

She has motor sport in her blood - her brother Ralph is a former Jordan F1 driver and her father, also named Ralph, founded Van Diemen International Racing Ltd - and she was delighted when Formula Woman put her in the spotlight.

The Privilege Insurance Formula Woman Championship, which was watched by thousands of ITV1 viewers over the summer, has helped to secure a place for women in motor sport, said Natasha.

The event attracted lots of interest throughout the country, with 10,000 hopeful women drivers originally applying for a place in the race.

Now, said Natasha, it has been recognised that women’s motor sport is a market ready to be exploited: "It is probably now not any more difficult for a woman to get into the sport as it is for a man. Teams and sponsors are seeing a woman as a more interesting product."

The Formula Woman event took place over a series of races at Oulton Park, in Cheshire, Knockhill in Fife, Scotland, Cadwell Park in Lincolnshire and then the finals at Brands Hatch, Kent.

Natasha, who was favourite to win from the start, said it was an amazing experience that had made a huge impression on her: "You would never have an experience like that anywhere else - facing competition of that calibre and being on television changes you as a person," she said.